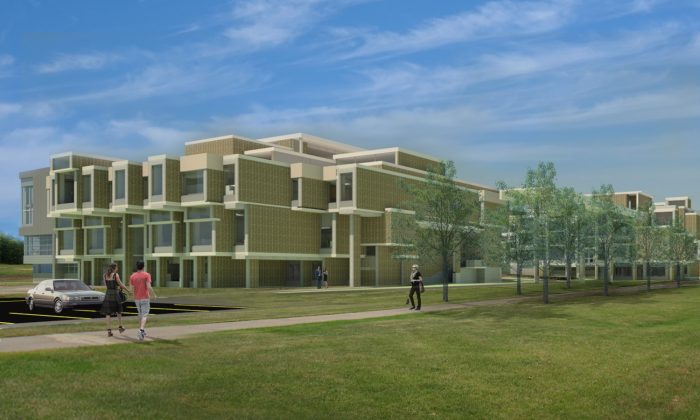 GOSHEN—As workers remove the last piles of debris and begin the sanitation process ahead of the construction phase of the Orange County Government Center, the bids for the project were announced on Dec. 22.

The county received 25 bids with the intent to award four of them for different aspects of the project. The lowest bids totaled $52.2 million, about $5.5 million lower than what the county had budgeted for. County Executive Steven Neuhaus said he hoped the bids would be awarded in the next 30 days.

The Government Center was closed in 2011 by former County Executive Ed Diana after severe damage by hurricane Irene.

Neuhaus said a lot of the problems stemmed from years of neglect, but county officials said the poor design was also a problem. One cited hundreds of thousands of dollars in heating bills alone because of the poor insulation, and another joked that no one would put file cabinets near the windows for fear the box-like extensions would fall. After the facade was removed however, he said they did not find any cracks in the foundation.

What you’re going to see now is a lot more accommodating, a lot more welcoming of an entrance way.
— County Executive Steven Neuhaus

Diana was in favor of completely rebuilding the Center, but the legislature voted to renovate instead—removing and rebuilding one of the divisions and stripping the other two down to their concrete foundations.

According to the plan, the renovations will add another 47,500 feet to the Government Center and connect under one roof county government services that are currently being housed all around the county during the renovation. With connecting walkways to the Orange County Court House and an improved floor layout, Neuhaus said the new center will will be much more efficient and welcoming.

“It was like going through a basement back door, climbing up a concrete stairway, going down a hallway to wherever you were going,” said Neuhaus describing plans for the new entrance on a media tour of the site. “What you’re going to see now is a lot more accommodating, a lot more welcoming of an entrance way.”

He said after some uncertainty as to whether the DMV in Goshen would return, it is slated to reside on the first and second floors of division three.”We’re excited about that,” Neuhaus said.

So far the demolition part of the $74 million project is “pretty much on schedule,” said Neuhaus. He expects the construction phase to start next month and the project to be finished by the end of 2017.

Fans of the 45-year old Paul Rudolf building tried to stop the building’s demolition with two lawsuits, both of which they lost. In the most recent case, three plaintiffs challenged the county’s environmental review on the grounds that it did not indicate the façade of the two divisions was going to be removed.

A Supreme Court judge threw out their complaint.

“No rational interpretation of the language used in the description could result in the reading advocated by the petitioners,” Judge Christopher E. Cahill wrote in his Dec. 15 decision to dismiss the petitioners’ case.

He said they also did not demonstrate “injury-in-fact that is different from the general public”, and even if they had, their petitions passed the 4-month statute of limitations.

The plaintiffs’ attorney, Michael Sussman said he disagreed that the plaintiffs, one of which lived one eighth of a mile from the building and another who represented the Paul Rudolph Heritage Foundation, did not have standing, “However, since the destruction has been wrought, these disputes are now academic,” he wrote in an email.
“Likewise, we believe the substantial changes to the project as amended re-kindle the
limitations period.  However, due to the status of the project and the timing
of Supreme Court’s decision, this issue cannot be meaningfully appealed.”
As the fight in the courts to preserve the building ended, so, too, a few weeks ago did the protest outside the construction site, said Holt Construction supervisor Tim McGovern. He said for a long time, protesters would stand outside the fence heckling the workers and taking pictures.

“Until the main part of that building [division two] came down,” he said. “That’s when it stopped.”

He said the court orders that barred certain things from being done while the case was open was “trying at times, but we prevailed.” He said the mild weather and sparse rain helped keep the project on schedule.