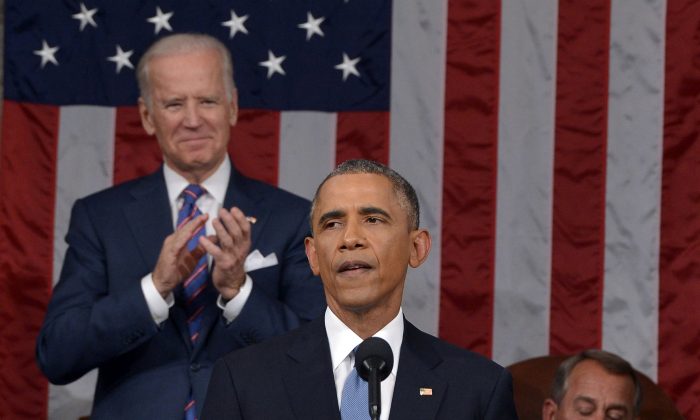 Biden’s Smile on Good Morning America Reveals It All

Last night at the State of the Union, when President Obama turned the page on a past mired in “vicious recession,” Vice President Joe Biden stood behind him, smiling and looking like the encouraging father figure, as he often does.

The president had called out to his number two early in the speech, thanking Biden for his “great work” on job training for high-paying American jobs. He also called out first lady Jill Biden, for helping veterans and military spouses get new jobs.

The very next morning the affable Biden on ABC’s “Good Morning America” smiled again—a big smile, but only after a very notable pause.

He had been asked by host George Stephanopolous if there was a chance he would run for the Democratic presidential nominee.

Stephanopolous prefaced his question by stating the obvious: that “Hillary Clinton is lining up staff, including many members of President Obama’s team, and our latest poll shows [Hillary Clinton] is the overwhelming choice of Democrats.”

Back to Biden and his very large smile.

Or to be even more specific:

Smile. “Yes.” Smile. “He he.” Smile. “There is a chance.” Smaller smile. “But I haven’t made my mind up about that. We have a lot of work to do between now and then. There is plenty of time.”

According to a summary of 192 polls tracked by the Huffington Post, Joe Biden’s unfavorable rate of 46.2 percent is higher than his favorability rate of 41.2 percent.

In terms of how Americans see him as a presidential contender, in a recent CNN poll asking voters who they would pick, only 8 percent choose Biden. That is to Clinton’s 58 percent.

The Washington Post makes the point that Biden comes in third after democratic Sen. Elizabeth Warren, whom many Americans have never heard of. Author Philip Bump points out Biden at least has name recognition.

So what does the smile mean? A long shot? A dream? Saying it because he can? Saying it and knowing the likely response it will engender? Of course, only the man himself would be able to answer the question.

In the meantime, aside from hundreds of news stories about his surprise announcement that he is not out of the race just yet, the twitter universe is adrift with insulting comments about Biden.

His appearance as he perched behind the president during the State of the Union address also struck more than one person as funny.

One twitter user refers to Biden as “one of the best wing men of all time.”

Another said, “Biden, the greatest hype man since Flavor Flav.”

Joe Biden is one of the best wing men of all time. pic.twitter.com/zkxIeuicxT