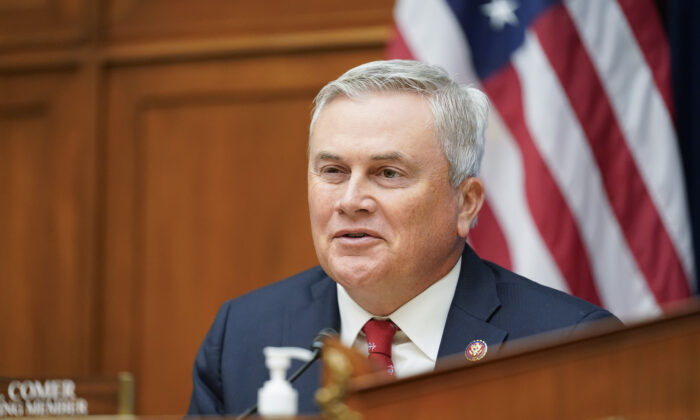 The Chinese Communist Party will likely become the beneficiary of President Joe Biden’s push to fill U.S. streets with electric vehicles, according to 16 Republicans on the House Oversight Committee.

The lawmakers, led by the committee’s ranking Republican member, Rep. James Comer (R-Ky.), and Rep. Andy Biggs (R-Ariz.), sounded the alarm in an Aug. 24 letter (pdf) to Transportation Secretary Pete Buttigieg. They wrote that Oversight Committee Republicans are examining “the false claims” made by the Biden administration about the impact of electric vehicles on U.S. jobs.

To rebuke the administration’s claims, the lawmakers pointed out how Ford will cut about 8,000 jobs this summer to “boost profits to fund its push into the electric-vehicle market,” citing a July article from Bloomberg.

“Most of the 8,000 jobs will be salaried workers in the United States, representing as much as 25 percent of Ford’s American salaried workers,” they wrote. “Ford is focusing on eliminating employees from its gas-fueled vehicle line.”

Aside from the job cuts, Ford has turned to a Chinese supplier for battery packs. According to a statement from Ford’s website, the U.S. automaker inked a cooperation agreement with China-based Contemporary Amperex Technology Co. Ltd. (CATL) in July. Under the terms of the agreement, CATL will supply electric batteries for certain models of Ford’s electric pickup trucks and SUVs beginning in 2023.

CATL stated that its agreement with Ford allows the two firms to “leverage their respective strengths to jointly explore new business opportunities worldwide.”

However, the lawmakers warned about CATL’s ties to the Chinese communist regime.

“This raises concerns about whether the push for EVs over gas-fueled vehicles will make America even more reliant on the Chinese Communist Party (CCP) instead of American energy resources,” the lawmakers wrote. “It is troubling that the Administration-endorsed EV future is already eliminating American jobs while benefiting China.”

The Inflation Reduction Act, legislation that Biden signed into law on Aug. 16, offers tax credits of up to $7,500 for people buying a new electric vehicle and $4,000 for those purchasing a used one. The tax relief program has been criticized by some Republican lawmakers as benefiting only wealthy Americans, given the higher cost of electric vehicles compared to gasoline models.

Also in their letter, the lawmakers questioned Buttigieg’s statement during a congressional hearing in July, when he said the rise of U.S. domestic clean energy production would be “creating a lot of jobs.”

“As the Secretary for the U.S. Department of Transportation (DOT) and an advocate for Americans’ widespread adoption of EVs, your agency is in a position to explain how Ford’s actions help American workers and the economy,” the letter reads.

The lawmakers wanted Buttigieg to schedule a briefing with Oversight Committee Republicans before Aug. 31.

“We request that you provide the Republican staff of the Committee a briefing to address the loss of American jobs and industry to China and other nations,” the lawmakers wrote.