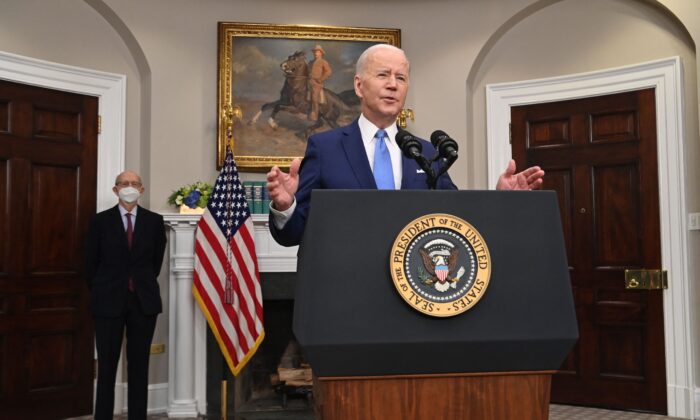 President Joe Biden, with retiring US Supreme Court Justice Stephen Breyer, speaks in the Roosevelt Room of the White House in Washington on Jan. 27, 2022. (Saul Loeb/AFP via Getty Images)
Viewpoints

It’s a measure of how thoroughly the left controls public discourse that diversity on the Supreme Court is being discussed entirely in racial and gender terms.

To make the court “look like America,” Biden’s pool should include candidates from these categories:

Protestantism is the largest religion in the country, claiming nearly 50 percent of all Americans. A court that “looks like America” should include four or five Protestants.

Yet for decades, Protestants have been almost entirely absent from the Supreme Court. Eight of the nine sitting justices are Catholic or Jewish. From 2010, when John Paul Stevens retired, until 2017, when Neil Gorsuch was appointed, the bench included no Protestants at all. Even Justice Gorsuch, although he presently identifies as Episcopalian, was raised as a Catholic.

Biden is limiting his pool to African-American women, who constitute about 6 percent of Americans, while disregarding an excluded group composing nearly half of Americans!

One reason the administration gives for appointing an African-American woman is that none has ever served on the court. No Hispanic man has ever served on the Supreme Court, either—unless you count Benjamin Cardozo, a Sephardic Jew who died in 1938. Yet, Hispanic males make up 10 percent of the country. They are, therefore, a much larger cohort than African-American women (about 6 percent).

Currently, the bench includes one African-American (Clarence Thomas) and one Hispanic (Sonia Sotomayor). If Biden wants the court to “look like America,” then appointing a Hispanic should be the higher priority. A Cuban-American might be best, since none has ever been a Supreme Court justice.

For decades, nearly all justices have been raised, or spent their prior professional lives, in California or on the East Coast. President Donald Trump broke the coastal monopoly by appointing Gorsuch, who hails from Colorado—although even he had spent a fair amount of time in Washington, D.C.

Trump also nominated Amy Coney Barrett, from Louisiana and Indiana. His other nomination, Brett Kavanaugh, is a product of the Beltway.

Biden’s current crop of candidates does little for geographical diversity: Nearly all have spent their lives either in California or on the East Coast.

Lawyers Who Attended Any of the Other 201 Accredited Law Schools

Although there are 203 law schools accredited by the American Bar Association, the court has long been dominated by graduates from only two: Harvard and Yale. Today, every justice but one has a Harvard or Yale law degree. The exception is Amy Coney Barrett, who graduated first in her class at Notre Dame.

The need for diversity in this regard isn’t widely understood. Although Harvard and Yale are nominal rivals, they’re both located in a tiny corner of the country, and they largely share a common culture, often called “legal realism.” Most of Biden’s current candidates also received their law degrees from Harvard or Yale.

If Biden truly cares about judicial diversity, instead of ruling out males and non-blacks, he’d rule out Harvard and Yale. The time is long overdue for justices with outstanding academic credentials from schools such as the University of Chicago, the University of Texas, and BYU. As a corollary, Biden should seek judges from state tribunals, who are under-represented on the Supreme Court, rather than more federal judges, who are already grossly over-represented.

Asian-Americans and Other Minorities

In fairness, there are other important minority classifications to consider. They include Native Americans, East Indian Americans, and some long-established American religious denominations, such as the Mormons. To my knowledge, none of these groups ever has been represented on the Supreme Court. If Biden wants to make the court “look like America,” then he shouldn’t exclude them.

Ignorant people sometimes suggest that originalism is something new. But originalism has been the principal Anglo-American way of interpreting legal documents for over 500 years. The Founding-era record tells us that the Constitution was designed to be interpreted using originalist methods.

About the only place non-originalists thrive is among “progressives” who adopt other methods of “interpretation” so they can get the political results they want. Despite this imbalance, the court has only one consistent originalist—Justice Thomas. Given the real-world balance, a court that “looks like [legal] America” should have eight or nine originalists, not just one.

This, also, will be controversial: The Constitution doesn’t require federal judges to be lawyers. That may have been because during the Founding-era, educated people were expected to be familiar with basic legal principles, whether they practiced law or not.

Even today, many non-attorneys are familiar with legal principles, and many could contribute outstanding knowledge in fields such as finance, technology, and medicine.

Well over 99 percent of Americans are non-lawyers. So the justices in a court that truly “looks like America” should have all, or almost all, non-lawyers.

Of course, I don’t believe the Supreme Court should consist mostly of non-lawyers. But the scenario highlights the foolishness of choosing justices so the bench “looks like America.” On the other hand, one or two knowledgeable and stable non-lawyers might improve the quality of court decisions.

In sum: If Biden really wants the court to “look more like America,” he should broaden his pool. His current prospects are mostly privileged, mostly Harvard-Yale, mostly coastal lawyers from a racial minority already represented. They don’t serve the purpose of genuine diversity at all.