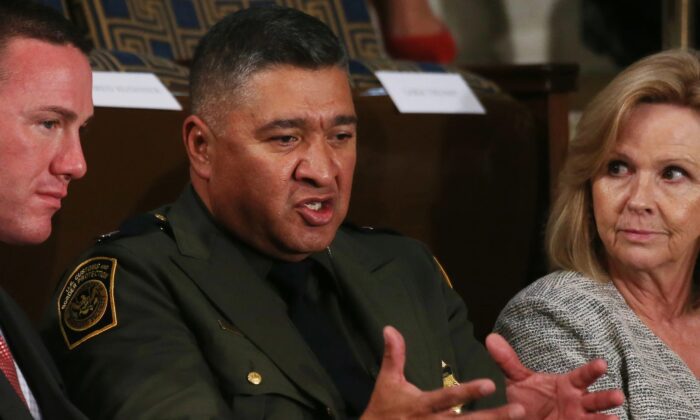 Then-Border Patrol Deputy Chief Raul Ortiz sits in the first lady’s box in the House chamber as a special guest at then-President Donald Trump’s 2020 State of the Union address on Feb. 4, 2020. Ortiz in 2021 became the bureau’s chief, and testified in late July that in his 31 years’ experience, he has not seen the border in such crisis as it is now. (Mario Tama/Getty Images)
Viewpoints

The border surge of the past 18 months is a crisis of the Biden administration’s own making.

That’s the conclusion to be drawn from a video of a July 28 deposition by Border Patrol Chief Raul Ortiz. The video, which was part of discovery in a lawsuit by Florida Attorney General Ashley Moody, was obtained and reported on by Fox News Digital.

You can watch the chief’s testimony here.

But Ortiz, who has 31 years of experience, concluded affirmatively that there has been a significant increase in illegal border crossers since Biden took office. Not only that, he also acknowledged that the president’s policies have been the driving force behind the record numbers.

As I’ve written here before, the Biden administration is a “rogue prosecutor” when it comes to the border.

Attorneys representing Florida asked why there have been such large increases in illegal immigration numbers.

“In my experience, we have seen increases when there are no consequences,” Ortiz said at the deposition.

According to Customs and Border Protection figures as of Aug. 15, with 45 days remaining in fiscal year 2022, total encounters with illegal immigrants by the Border Patrol had reached 1,822,160. That’s up from just 405,036 in fiscal 2020, that final full fiscal year of the Trump administration.

When asked whether the Biden administration’s signaling that it won’t enforce border laws will lead to “exponential” increases of illegal border crossers, he said, “I do think it will increase, yeah.”

When asked whether the southern border is “currently in crisis,” and whether we are seeing an “unprecedented” number of people illegally entering the United States, Ortiz answered “yes” to both. That runs counter to statements by Department of Homeland Security Secretary Alejandro Mayorkas, who has repeatedly insisted that the border is “secure.”

“Look, the border is secure,” Mayorkas said in July at the Aspen Security Forum in Colorado just over a week before Ortiz’s testimony. “We are working to make the border more secure. That has been a historic challenge.”

The border has been a “historic challenge,” chiefly because the administration has made it so.

At this point, the repeated messaging about the border being secure is obviously absurd and insults the intelligence of the American people.

On top of everything else, Ortiz acknowledged that one of the primary reasons people are risking illegal border crossings in such high numbers is that they think they will be released.

“Has the Border Patrol in a year ever had the number of encounters that it’s going to have in 2022?” the attorney asked. Ortiz said, “No.”

Worse, this administration has systematically undermined the Border Patrol. Whether that’s by maligning Border Patrol agents for doing their job or by failing to prosecute illegal immigrants once apprehended, it’s difficult to contend that Biden and company take the border problem seriously. In fact, their actions suggest not only incompetence, but the intention to make immigration laws little more than a farce.

The only positive development during this Biden-caused disaster is that a pair of border-state Republican governors—Gov. Greg Abbott in Texas and Gov. Doug Ducey in Arizona—have implemented a clever political maneuver to draw attention to the issue and put the ball squarely in the court of Biden’s fellow Democrats. Abbott and Ducey are busing thousands of border crossers to Washington, D.C., New York City, and Chicago—big, blue cities where “all are welcome.”

It didn’t take long for the Democratic mayors of those cities to lash out at Republicans for handing them the mess, and in the case of the District of Columbia, for Mayor Muriel Bowser to call for the National Guard to help.

Bowser’s request was denied by the Biden administration—twice.

Maybe instead of squawking about Republicans, they could—and should—say something about the administration that’s caused this mess in the first place.