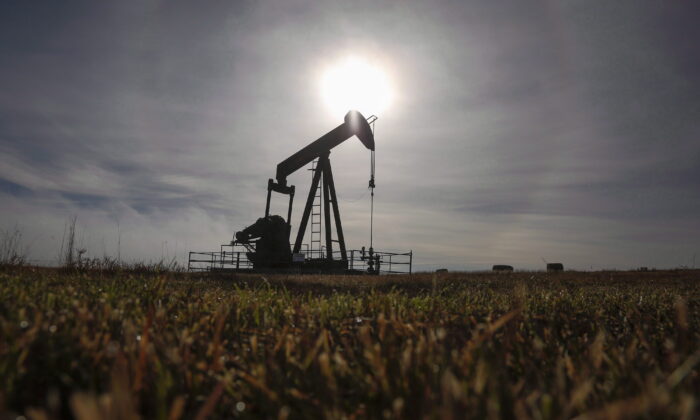 A pumpjack works at a well head on an oil and gas installation near Cremona, Alberta, in a file photo. (The Canadian Press/Jeff McIntosh)
Economy

The Biden administration’s policies are hindering U.S. oil and gas companies from producing energy commodities, driving up the price which in turn results in consumers paying more, according to Jerry Simmons, the president of the Domestic Energy Producer Alliance (DEPA).

DEPA is a nationwide collaboration of 39 coalition associations representing individuals and companies who engage in domestic onshore oil and natural gas exploration and production.

The coalition represents 80 percent of businesses in the United States that are not multi-national and aims to find common-sense solutions to issues that face the industry—including its relationship with the federal government—particularly in light of President Joe Biden’s push toward green energy.

“We became the number one producer of crude oil and natural gas last year, and that’s something that nobody expected to happen,” Simmons explained.

However, numerous policies put in place by the Biden administration in an effort to achieve its ambitious climate agenda and reach net-zero emissions by 2050 have crippled oil and gas companies and left consumers paying more.

Simmons noted that on his first day in office, Biden revoked the Keystone XL oil pipeline contract, a 1,700-mile pipeline that was designed to carry roughly 800,000 barrels of oil a day from Alberta to the Texas Gulf Coast, passing through Montana, South Dakota, Nebraska, Kansas, and Oklahoma.

“[Biden] put a halt on federal government leases, the federal government in this country owns about 30 percent of the mineral estate. The rest of that is owned by private individuals. And the government can’t stop them from developing those properties. But there’s still a lot of production, especially in the western U.S., that’s on federal lands. And he stopped that regulatory-wise, they started rolling back regulations that had been approved by the previous administration. That increased our costs,” Simmons explained.

“They encouraged banking to not lend to oil and gas and fossil fuels, so coal companies as well. So our access to capital dried up this year, and it became very difficult … it’s a host of things that have happened that have caused these prices to go up.”

Simmons said the current policies of cutting off funding that would allow companies to produce oil and gas in the United States is a “big problem.”

The DEPA president also noted that Biden re-entering the Paris Climate agreement has placed restrictions on the United States and what oil and gas companies can do.

“The idea that you have a federal government that has said it wants to do away with oil, gas, and coal by 2050, that makes it very hard for people to think about it as a future resource,” Simmons said.

“At the same time, the Energy Information Administration just issued a report where they said that currently, worldwide fossil fuels provide between 80 and 85 percent of all the energy consumed. And by 2050, that projection is still at 70 plus percent. So you know, oil, gas, and coal aren’t going to go away anytime soon,” he added.

“But the Biden administration has done all they can to hinder us. We have some tax deductions that we get for doing business in this country that they’re trying to remove, and again, that drives up the cost and when you drive up costs, people stop doing certain businesses, or they increase the cost of doing that business and pass it on to the consumer, which is exactly what’s happening.”

According to statistics from the Energy Information Administration, one in three U.S. households faced challenges in paying energy bills in 2015, and one in five households claimed they had gone without food and medicine to pay energy bills amid rising prices.

Since the start of this year, gas prices have risen 35 percent amid lower supplies and a surge in demand as pandemic-hit economies around the world reopen, prompting fears that there is simply not enough gas stored up for the winter if temperatures were to be particularly cold in the northern hemisphere.

“Those are terrible things to happen in this country. And I think there’s a huge portion of this country, the folks that live here that don’t have a clue about that’s going on, they don’t know that their neighbors are suffering,” said Simmons, who is currently in Washington D.C.

“And that’s a message that we’ve been trying to deliver to Washington. And that’s actually why I’m here now, the next couple of days, we’re going to be meeting with about 20 different representatives of the Senate and the House to talk about exactly these issues.”