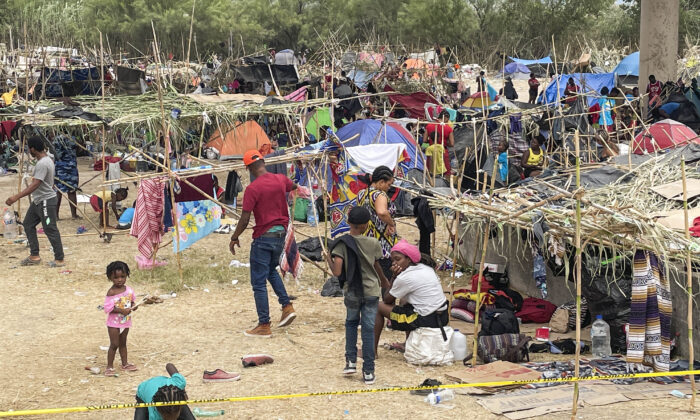 President Joe Biden’s pick to lead Customs and Border Protection (CBP), Chris Magnus, faced a confirmation hearing Tuesday, in which he refused to call the record high surge of illegal migrants entering the United States at the southern border a crisis but did acknowledge it was an urgent matter.

“Senator, let me assure you that no one believes there is greater urgency to this matter than I do,” said Magnus when asked by Sen. Todd Young (R-Ind.) if he thinks the situation at the southern border is a crisis. Young continued to press Magnus to acknowledge that the situation was a crisis, but Magnus would not.

“DHS tells us that we’ve already seen over 1.3 million illegal border crossings so far this year. That’s about 1.5 times the population of Indianapolis, Indiana. I’d say that’s a crisis. What number of illegal crossings would you consider to be a crisis? What if we were to quintuple that number? Would you then call it a crisis?” pressed Young.

“Chief Magnus has built great relationships through Arizona, and I’m certain he’ll bring that same consensus-building common-sense approach to CBP,” said Sinema, adding that collaboration is his strength. “Chief Magnus has shown the tenacity and the ability to do exactly that [working together] at every step of his career, … as he’s moved up from a police officer in Michigan to a police chief in Arizona, and I have no doubt that he will step up again when he is confirmed as commissioner of CBP.”

However, Young and other GOP members of the committee wanted some practical and immediate solutions to the southern border crisis. Young asked Magnus if he would commit to reinstating the contracts to have the border wall completed, to which Magnus said he was not familiar so could not commit.

“What I will tell you, sir, is that I think there is a place for infrastructure. And I think that includes, in certain sections, completion of barriers, walls, other things,” said Magnus.

Magnus has been critical of former President Donald Trump’s border policies. Testifying to a Senate committee in 2018, Magnus said he agrees with law enforcement officials in his state, who say spending billions on the border wall is a waste of resources that would be better spent on hiring more officers.

“Directing federal resources into improving staffing and infrastructure around ports of entry would be far more effective in halting the movement of drugs and guns across the border than simply constructing new barriers between these ports,” said Magnus at the 2018 hearing.

Later Sen. Steve Daines (R-Mt.) asked Magnus if he would support the policies from the Trump era that helped to stem the surge of illegal immigrants.

“You were publicly critical of the Trump administration policies, notably the efforts to crack down on sanctuary cities. Chief Magnus, as you look at the crisis we’re seeing now at the southern border, wouldn’t you agree … that we should take a step back and relook at some of the common-sense measures that were working during the previous administration?” asked Daines.

“As the police chief here, I’m deeply troubled by the Trump administration’s campaign against ‘sanctuary cities,’ which refuse to turn over undocumented immigrants to federal authorities,” Magnus wrote in the op-ed. He further clarified his position at the hearing Tuesday.

“I do appreciate the opportunity to clarify, since my first priority as a chief throughout my career has been around public safety, that my advocacy that you’re referring to in an op-ed was never political. It was a recognition that every community deserves to receive Byrne grant funding. This is critical funding that helps communities with their crime-fighting efforts … so my criticism was simply that any city should be able to have these resources so that the local residents don’t suffer,” said Magnus.

Sen. James Lankford (R-Okla.) said that if confirmed, Magnus would be “walking into a chaotic situation” with record numbers of drugs entering the United States and asked him to outline his plan to stop the influx of narcotics.

“Of course, if there was a ready-to-go plan to address all the problems that you’ve just described, my guess is that not only CBP, but you all as a body would have seen to it that it was implemented,” Magnus responded. He then said that a key part of his strategy would be to build relationships and collaborate with those who make the policy decisions.

If Magnus becomes commissioner of CBP, he would lead 60,000 employees and a budget of over $15 billion.