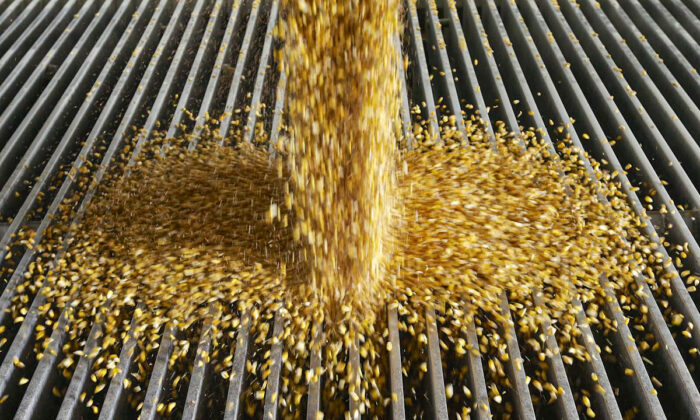 Corn is delivered to the Green Plains ethanol plant in Shenandoah, Iowa, on Jan. 6, 2015. Roughly 100 trucks a day filled with corn flow into the ethanol plant in southwest Iowa even as crude oil prices continue to collapse. Oil prices may have dipped below $50 a barrel for the first time since April 2009, but ethanol plants across the nation continue to operate at a brisk pace in order to satisfy a domestic and export demand that hasn’t weakened. (AP Photo/Nati Harnik)
Viewpoints

Biden’s Mandates for Increased Production of Ethanol Are Wrong-Headed

On June 3, the U.S. Environmental Protection Agency (EPA) announced that it will require American refiners to blend a record amount of ethanol and other biofuels into the country’s fuel supply. Reactions were mixed. Corn farmers in Iowa, where more than 40 percent of each year’s corn crop is turned into fuel, were happy.

Many environmentalists, oil refiners, and yours truly were dismayed.

There’s nothing inherently strange about President Joe Biden flying into Iowa to crow about mandating increased production of corn-based ethanol and E15 (motor fuel with a 15 percent ethanol content instead of the usual 10 percent). President Donald Trump did almost exactly the same thing four years before, flying into Iowa, a major corn-growing state, the month before midterm elections to announce E15 mandates. (The D.C. Circuit Court of Appeals blocked the implementation of E15 mandates, saying that the administration didn’t have that authority under the Clean Air Act.)

What’s unusual about Biden’s move is its timing. Not only are the midterm elections still five months away, but normally E15 is banned in the summer months due to the fact that burning it increases smog. In the name of reducing atmospheric emissions of a nonpollutant—the CO2 emitted from burning gasoline—the president is waiving longstanding anti-pollution regulations to allow increased smog this summer.

Other environmental costs of mandating ethanol in fuel include the loss of natural habitat for wildlife. Brett Hartl, the government affairs director at the Center for Biological Diversity, laments, “Millions of acres are being pointlessly sacrificed just to grow corn to fuel [vehicles].” Tilling more land to produce ethanol also accelerates the depletion of water tables and increases water pollution due to increased use of fertilizer—a vivid example of that being the “red tide” that afflicted Florida several years ago.

Then there are ethanol’s negative economic effects. Mandates to burn more corn in vehicle engines leave less corn to be consumed as food. Not only does the price of corn rise, but so do the prices of a wide array of foods that have corn as an ingredient. Corn is also a major food used for raising livestock, so rising corn prices mean higher meat prices. Also, to the extent that farmers switch from growing other crops to taking advantage of the ramped-up demand for corn, prices of others grains rise too. According to a report published earlier this year in the Proceedings of the National Academy of Sciences, past increases in ethanol production in response to federal mandates have increased the price of corn by 30 percent and the price of other crops by 20 percent.

This year, however, the potential for food prices to be even more than 20 to 30 percent higher is great. One reason for this has already been in thousands of headlines this year: the horrific Russian decimation of Ukraine. That war alone has pushed the world to the brink of acute food shortages in many countries around the globe. Lesser events, such as the unusual heat waves in India, are only adding to the prospect of severe food shortages.

Americans are already feeling the pinch of food inflation every time they go to the grocery store. Biden talks about getting inflation under control, but his desire to use more farmland to grow corn for fuel instead of people food belies his rhetoric.

Increasing mandates for ethanol at a time of soaring food prices is more than insensitive; it’s cruel.

As bad as American shoppers have it, the situation is far grimmer overseas. Literally tens of millions if not hundreds of millions of human beings are at risk of either starvation or severe malnutrition this year, due to the huge disruptions of grain supplies. This provides a golden opportunity for our country to win hearts by taking the lead in shipping humanitarian relief in the form of food to hungry lands. Instead of mandating that more corn be grown to make fuel, the rational and moral policy would be to lower such mandates. That would free up massive amounts of farmland so American farmers could grow more food and help to alleviate the global food crisis.

There’s no need here to worry about U.S. corn farmers. Global grain prices are at high levels and heading higher, so the farmers don’t need ethanol mandates to make a handsome profit this year. A brief aside here: Do you think the Biden administration will seek to impose a windfall profits tax on corn farmers as they profit from a global grain shortage? Not a chance! Nor should there be such a tax. In the eyes of the Biden administration, only fossil fuel companies merit such special abuse.

The problem here is that Team Biden is obsessed with crushing American fossil fuel production. They would much rather have Americans burn ethanol than refined petroleum in their vehicle engines. That’s a dubious policy in the best of times, but at a time of critical global food shortages, it’s obscene.

I don’t think Team Biden hates people, but I do think their Ahab-like obsession with choking off fossil fuel production has caused them to lose needed perspective here. Let us hope and pray that they wake up and alter course in time for American farmers to grow more food and save lives.