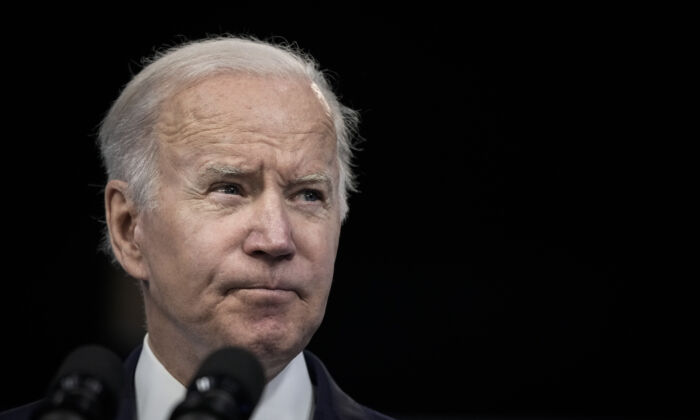 President Joe Biden speaks about inflation and the economy in the South Court Auditorium on the White House campus in Washington on May 10, 2022. (Drew Angerer/Getty Images)
Viewpoints

As one who has considered the Biden–Sanders so-called compromise Democratic platform of 2020 to be a potentially mortal threat to U.S. civilization, and accordingly to the preeminence of the West in the affairs of the whole world, I’m pleased that a good part of it appears now to be likely of adoption.

What has been billed as the Inflation Reduction Act has been agreed upon between sometimes-maverick Sen. Joe Manchin (D-W.Va.) and Senate Majority Leader Chuck Schumer (D-N.Y.) and is a blessing in disguise. If this program weren’t enacted with enough time left in the Biden term for its impact to be demonstrated, the country would never know how catastrophic and self-destructive this program is.

Having included some of this in the Democratic platform in a trade-off that gave the less-frightening Joe Biden the party’s presidential nomination over Marxist Sen. Bernie Sanders (D-Vt.)—although Sanders had run well ahead of Biden in the primaries prior to Super Tuesday (when the powers that be in that party delivered the nomination to Biden)—the Democratic grandees thought they had struck a winning bargain. They had a united party, a radical left “progressive” platform, and an innocuous candidate remembered for decades as a journeyman moderate.

In the first presidential debate, when then-President Donald Trump started to lumber then-presidential candidate Biden with his far-left platform, Biden said, “The platform is what I say it is.”

The Democratic campaign was always an attempt to slide a radical left remake of the country in with an unfrightening candidate on the flapping wings of Trump hate.

There was one telling moment in the stormy interlude between Election Day and Inauguration Day when Biden said he would be the most “progressive” president since Franklin D. Roosevelt. FDR regarded himself as fundamentally a conservative, preserving almost all of the American way of life but slightly to the left of center in contemporary affairs in order to enact legislation that would assure a generally contented working and agrarian class, without which he said the United States would be politically unstable.

He rolled back welfare in the summer, refused to pay cash to the unemployed unless they were actually disabled—he offered workfare in conservation and infrastructure programs instead—and gave deficit reduction an honest chance in 1937 and 1938. The current leftist enthusiasm for simply redistributing money from those who have earned it to those who haven’t would have appalled FDR, who wanted to make the United States safe for people who lived in 40-room houses in thousand-acre estates as he did, and famously said, “It is hard for a man with five children and 10 servants to make both ends meet.”

The likely passage of the Inflation Reduction Act, which deluges more than one-third of a trillion dollars into the insane Al Gore–John Kerry radical green straitjacket, makes an all-out effort to propel the United States by the scruff of the neck and the small of the back into electric cars, increases some corporate taxes, reduces drug prices, and funds a huge increase in frontline tax collecting by the IRS, which is already the most obnoxious and aggressive tax collector in the world.

It’s fortunate that Manchin stopped the Build Back Better monstrosity and held this less deadly measure up for 18 months—the country will only need one year of this full metal jacket eco-lunacy with accompanying stagflation to require defibrillation for the U.S. middle class and the removal of the economy from suicide watch.

The same reasoning excuses Trump for not turning himself inside out to reelect the Republican senators in Georgia in the special elections of 2020: If the Democrats couldn’t put their legislation through the Senate, the country would never discover how insane and, in some respects, evil is this aggressive capitulation of the Democratic Party to “wokeness,” hostility toward whites, the denigration of U.S. history and traditions, and falsely righteous socialism, as well as its embrace of a massive assault on capitalism by claiming to save the planet by throttling much of U.S. industry in the name of climate, and its appeasement of America’s enemies.

Two years from now, with the additional inflation, economic slowdown, intensified IRS terror, and a horrible fiasco over electric cars and sustainable energy this Manchin–Schumer legislation will produce, the public will judge the merits of the contending parties, without the ballot-harvesting and outside financing of vote-counting modifications that marred the 2020 election, despite a hysterical and almost air-tight attempt by the political establishment to stifle and obscure the fact (which the majority recognizes).

The likely passage of this legislation will demonstrate that there are practically no moderate Democrats left and that it’s a party almost completely indulgent of a racial and economic anger that’s barely disguised, although it’s muffled by Biden’s havering and waffling. If the Democrats’ ineffectuality had continued, the full proportion of the dangers of their new “progressive” vocation would have been disguised. The likely adoption of this largely insane measure completes the self-unmasking of the Democrats as extremists and will appreciably strengthen the already predominant Trump faction of the Republicans.

The Trump-haters within the Republican Party rushed out of their closets after the last election shouting with joy and embracing each other that the great ogre had been banished. As it has become clear that he’s obviously the leading candidate for renomination by the Republicans and is apparently nearly 40 points ahead of his nearest competitor, the capable governor of Florida, Ron DeSantis, Never Trumpers are retreating in panic. They’re, as much as the Democrats, the victims of the catastrophe of the Biden administration in every policy area: It will ensure the victory of the Republican nominee.

Despite the mighty media effort to promote the Jan. 6, 2021, inquiry, the majority correctly see it as a contemptible mud-slinging operation that replaces impartiality with the justice of the Red Queen (the unspeakable Liz Cheney in this case). Even News Corp. has been rattled: The Wall Street Journal and New York Post don’t think Trump is fit to be president, and Fox News won’t interview him anymore. But they’re unlikely to join the Trump-hate lynch mob of the other networks and principal newspapers.

The media market is so fragmented and the media so profoundly distrusted and despised that it doesn’t matter much, and the campaign, in which News Corp. joined, to pretend that the 2020 election result was unquestionably fair, has failed. Everyone knows it was fishy and unseemly that the judiciary declined to try on their merits any of the 19 lawsuits over the constitutionality of the voting and vote-counting changes made in the swing states to sand-bag Trump, but supposedly to facilitate voting in the COVID-19 pandemic. A movement of only 50,000 votes in three states would have given it to Trump in the Electoral College.

The latest wheeze, that both elderly men, Biden and Trump, should retire, is self-serving claptrap. Biden is almost at the glue factory, and the Democrats will be punished in 2024 no matter who they have as a candidate. Trump was probably robbed, with the complicity of the judiciary, and the last thing he wanted on Jan. 6, 2021, was an insurrection. He urged “a peaceful protest,” having asked for increased security for the Capitol.

The voters decide when presidents retire, not journalists. Allowing Biden to be effectively progressive should deliver the government altogether to the Trump Republicans. The progressive Democrats and Never-Trump Republicans are heading for the last round-up together.