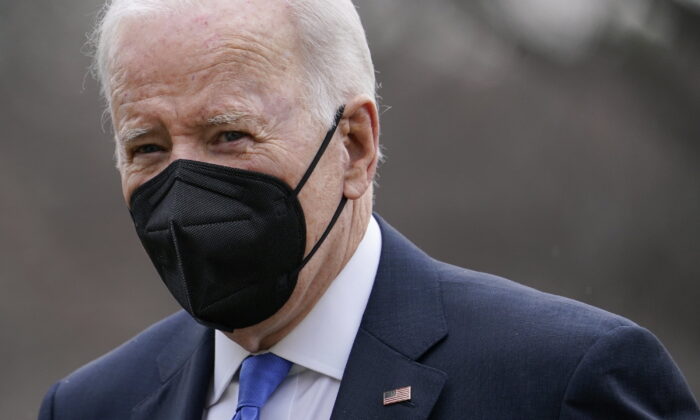 President Joe Biden walks on the South Lawn of the White House after stepping off Marine One on Feb. 14, 2022. Biden is returning to Washington after spending the weekend at Camp David. (AP Photo/Patrick Semansky)
Congress

Sen. John Barrasso (R-Wyo.), the ranking Republican member on the Senate Energy and Natural Resources Committee, has condemned the Department of the Interior’s Bureau of Land Management (BLM) for its failure to publish a public notice of onshore oil and gas lease sales for this quarter.

“The Biden Administration continues to defy the courts and the law. The BLM has blown past a critical deadline required to hold the first federal onshore oil and gas lease sale this year. As a result, Wyoming and other Western states will now miss oil and gas lease sales for the fifth quarter in a row,” Barrasso said in a statement.

“Even in the face of a global energy crisis, historic inflation, and skyrocketing gasoline prices, the Biden Administration continues to crush U.S. energy production.”

The administration paused new oil and gas leasing on federal lands and waters in January 2021 through Executive Order 14008.

In June, however, a Louisiana judge sided with several oil- and gas-producing states against the Biden administration, issuing a preliminary injunction against the pause, in Louisiana v. Biden.

Barrasso’s comments follow just weeks after a judge blocked the November 2021 sale of new offshore oil and gas leases by Interior’s Bureau of Ocean Energy Management, a practice mandated by the Outer Continental Shelf Lands Act—the only such offshore or onshore auction since the January 2021 leasing pause began.

The federal government held the November auction to comply with the injunction in Louisiana v. Biden, as reported by Reuters.

The Epoch Times reached out to the BLM seeking clarification as to whether its apparent delay on new oil and gas leasing sales this quarter violates federal law.

“We continue to comply with the injunction entered in Louisiana v. Biden and are reviewing recent orders from the district courts in Louisiana. We do not have any updates as to timing of the next steps in the process,” an Interior spokesperson said via email.

David Bernhardt, former Interior secretary under Donald Trump, told The Epoch Times that Interior’s response is “spin,” adding that Barrasso’s comments on the MLA were accurate.

“The determination of whether a party is complying with a court order is an issue determined by the court that issued the order, if it’s raised by other parties,” he said.

A spokesperson for the U.S. District Court, Western District of Louisiana, Lake Charles, which issued the preliminary injunction in Louisiana v. Biden, didn’t respond by press time to a request to clarify whether the Interior Department is violating the court’s finding through its failure to announce lease sales.

Tim Stewart, president of the U.S. Oil and Gas Association, told The Epoch Times in an email: “In defiance of the Court order to resume lease sales, the Biden administration chose to idle the federal oil and gas leasing program in 2021, and going forward. This week’s energy storage and price graphs show the direct impact of inaction over the past year.”

“This is directly reflected at the pump, where consumers are paying almost 50 percent more than last year at this time,” he said.

The four environmental groups—Friends of the Earth, the Sierra Club, the Center for Biological Diversity, and Healthy Gulf—that filed the complaint in “Friends of the Earth v. Haaland,” the case that led to the November 2021 offshore lease sale being blocked, didn’t respond to requests for comment.

Barrasso didn’t respond by press time to a request for more information about what he intends to do to address the alleged violation, and whether he has sought clarification on the injunction.