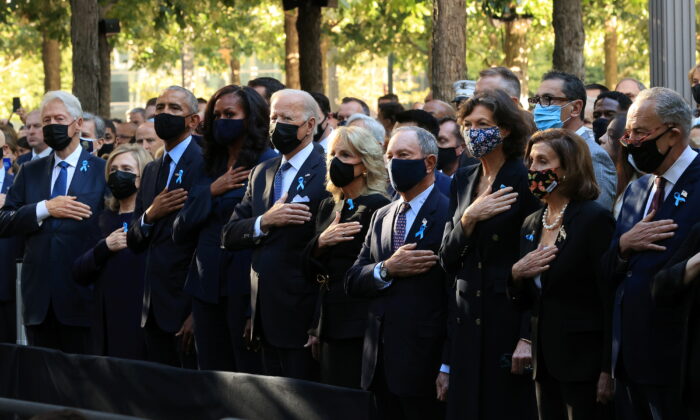 The memorial began at 8:40 a.m. with an honor guard representing New York firefighters and police officers. Some officers were carrying an American flag; the contingent was followed by drummers and bagpipers. The Young People’s Chorus of NYC sang the national anthem.

At 8:46 a.m, a bell was rung to mark the time the first plane hit the North Tower in Manhattan 20 years prior. Little sound could be heard, apart from fountains burbling.

Speakers soon started reading the names of the people who lost their lives during or immediately after the terror attack.

The Bidens departed about an hour later, en route to Shanksville, Pennsylvania, where another plane went down after crew and passengers fought with hijackers.

They planned to travel later in the day to the Pentagon, where a third plane struck.

The president does not plan to deliver public remarks, according to the White House. He did not speak to reporters either.

Instead, he recorded a video that was released on the afternoon of Sept. 10.

Biden recalled the heroics seen in the aftermath of the terror attacks and how America saw “a true sense of national unity.”

The first-term Democrat added that “unity makes us who we are” and called for people to “have a fundamental respect and faith in each other and in this nation.”

Former President Donald Trump told Fox News that he would visit Ground Zero after the ceremony on Saturday.