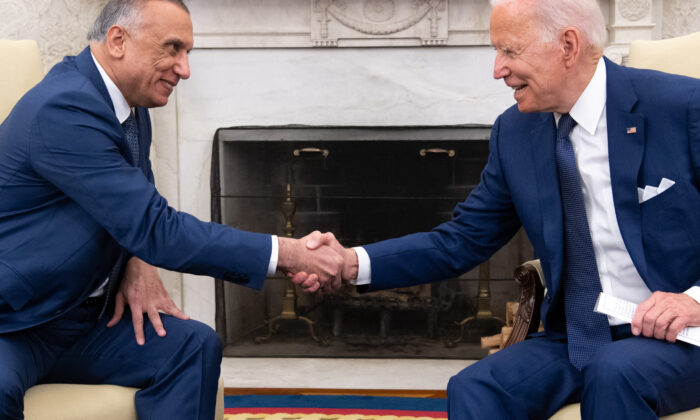 President Joe Biden’s recent announcement that the United States will end its “combat” mission in Iraq this year was likely a symbolic gesture meant to support an embattled Iraqi prime minister ahead of October’s elections, according to experts familiar with the situation.

“Our role in Iraq will be … it’s just to be available, to continue to train, to assist, to help, and to deal with ISIS as it—as it arrives.  But we’re not going to be, by the end of the year, in a combat mission,” Biden told reporters.

Kadhimi also reportedly told The Associated Press that “there is no need for any foreign combat forces on Iraqi soil.”

Numerous media outlets portrayed these statements as news that the United States will be withdrawing troops following a strategy similar to that in Afghanistan.

However, The New York Times reported that unnamed Pentagon officials said that only a “small but unspecified” number of the 2,500 American forces will be withdrawn, and White House press secretary Jen Psaki made statements suggesting that the U.S. military will continue to play a role in Iraq.

“This is a shift in mission. It is not a removal of our partnership or our presence or our close engagement with Iraqi leaders,” Psaki said during the July 26 press briefing.

A July 26 statement from the White House further said that Biden and Kadhimi “committed to a continued security partnership to ensure that ISIS can never resurge and to allow communities recovering from terror to rebuild with dignity even as the United States shifts to a purely advisory role.”

But even labeling Biden’s announcement as a mission shift is misleading, according to Scott Horton, author of “Enough Already: Time to End the War on Terrorism.”

Horton told The Epoch Times that America’s infantry troops largely serve as security for the military bases in Iraq while the special operations forces carry out the fighting against ISIS.

Special operations forces are not designated as combat troops, and they carry out clandestine operations rather than combat missions—meaning that Biden’s statements about ending the U.S. “combat mission” are essentially meaningless, he said.

“So they’re renaming infantry that just serve as force protection at the bases into something else. What difference does that make?” said Horton, who is also editorial director of AntiWar.com.

“Now you’re not an infantryman, you’re a guard. OK. Your job hasn’t changed at all.”

Horton agreed with what many other foreign policy pundits said of Biden’s announcement: that it was meant to be positive public relations for Kadhimi ahead of the October elections.

“All the Shiite parties want America out, so they’re redefining the troops we have there as noncombat troops—just advisors,” Horton said, referring to the branch of Islam followed by the majority of the Iraqi population. “This is really just a PR stunt to help the Iraqi PM, who looks bad for being too close to the U.S.”

Biden’s strategy in Iraq is starkly different from his plans to withdraw all troops from Afghanistan by the end of August. Many observers say Biden is maintaining the status quo in Iraq so as not to repeat the mistakes of President Barack Obama, who withdrew troops in 2011 only to redeploy them when ISIS captured western Iraq in 2014.

Horton disagreed with the idea that Obama’s withdrawal from Iraq led to the rise of ISIS. The reason ISIS became powerful enough to create a caliphate in 2014, he said, was that Obama armed al-Qaeda-affiliated rebels in Libya and Syria at around the same time. Some of those same fighters branched off to create ISIS.

Among other U.S. support, Horton was referring to Operation Timber Sycamore, a 2013 secret CIA operation to send weapons to the rebels fighting Syrian President Bashar al-Assad. Donald Trump ended the program when he took office in 2017.

Horton said that, unlike in Afghanistan, the Iraqi government is largely stable, is seen as legitimate by the country’s Shiite supermajority, and enjoys the support of Iran next door.

“The Shiite government in Iraq can fight against bin Ladenite Sunni radicals in that country from now on. Those people don’t threaten power at all. The Saudis can fling suicide bombers at them from now on, but America doesn’t need to be there,” he said. “In fact, they can probably solve the problem more quickly without the Americans there, because the Americans just motivate more people to join the effort against us.”

Moreover, the presence of U.S. troops in Iraq—coupled with Shiite militias and Sunni terrorists—makes the region a potential powder keg, he said.

“It makes perfect sense for ISIS to not just attack Americans [in Iraq], but to also make it look like the Iranian-backed Shiite militias are behind it, in order to promote conflict between America and the Shiites—so we fight each other instead of them,” he said.