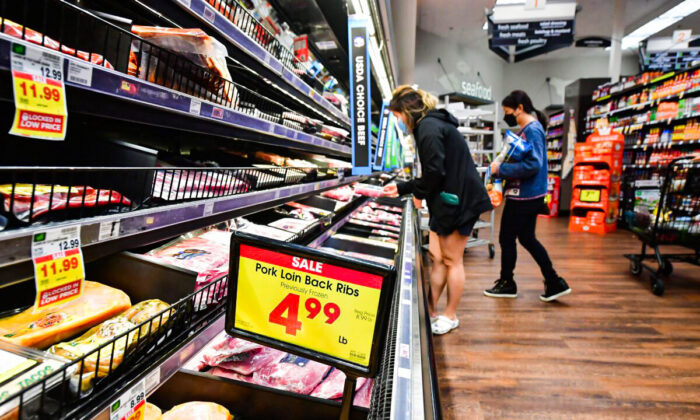 “It is better to be defeated on principle than to win on lies,” said Arthur Calwell, the leader of the Australian Labor Party in the 1960s, who presided over three election defeats and thus knew what he was talking about. President Joe Biden, on the other hand, who shares with Calwell a penchant for taking orders from his party’s extreme elements, seems intent on losing on lies.

In the inflation speech he gave on May 10, apparently intended to soften the blow of the following day’s disturbing 8.3 percent consumer price index number, it was as if the president was burning the “Buck Stops Here” sign that adorned the desk of Harry Truman—and, later, Ronald Reagan.

“The first cause of inflation is a once-in-a-century pandemic,” Biden contended. “A second cause: Mr. Putin’s war in Ukraine.”

But the beginning of the worst inflation in 40 years corresponds closely to Biden becoming president, paired with the House and Senate, which, under his party’s control, passed big spending bills and new burdens for business.

Economists with the Federal Reserve Bank of San Francisco in March found that “since the first half of 2021, U.S. inflation has increasingly outpaced inflation in other developed countries.” They concluded, “Estimates suggest that fiscal support measures designed to counteract the severity of the pandemic’s economic effect may have contributed to this divergence by raising inflation about 3 percentage points by the end of 2021.”

In other words, the $1.9 trillion stimulus Biden passed in March of 2021 is responsible for a large chunk, at least, of today’s historic inflation.

When asked, “Do you take any responsibility for the inflation in this country?” Biden replied, “I think our policies help, not hurt. … It’s not because of spending.” But prominent Democrat economists like Lawrence Summers, Jason Furman and Steven Rattner long ago warned that excess spending would cause excess demand.

Only last November, Treasury Secretary Janet Yellen, the former Federal Reserve chairwoman characterized as a heavyweight appointment by Biden, confidently asserted, “Sometime during the second half of the year [2022], we’ll see inflation rates moving back toward the 2 percent that we regard as normal.”

A little later, Nobel economics laureate Paul Krugman assured us that “people making knee-jerk comparisons with the 1970s and screaming about stagflation are looking at the wrong history. When you look at the right history, it tells you not to panic.” That’s the same Krugman who forecast that the Trump presidency would cause “a global recession, with no end in sight.”

Biden economic adviser Gene Sperling told Fox after the speech on May 10 that Biden “is doing everything he can on gas prices, not just releasing 60 million [barrels] from our Strategic Petroleum Reserve (SPR) but encouraging other countries to do so as well.”

Established after the 1973 energy crisis, the SPR—whose less than 600 million barrels constitute only 30 days worth of oil consumption for the country—was established for near-existential national emergencies like the cutoff of global petroleum supply routes in wartime; it was originally proposed by President Dwight Eisenhower following the Suez Canal crisis in 1956.

What good does tapping into our emergency government stockpiles do when the Biden administration is simultaneously scrapping oil leases in over a million acres in the Cook Inlet in Alaska, plus halting two leases for the Gulf of Mexico, as well as arguing in federal court that climate change predictions give the administration license not to approve any more leases anywhere?

Thanks to Biden’s continuing war on fossil fuels, the United States is producing about 1.5 million barrels a day less than we were before the pandemic. Is that “doing everything he can on gas prices,” as Sperling claims?

Is this the “laser-like intensity trying to deliver some easing of pressures to household budgets” that veteran Biden economics adviser Jared Bernstein of the administration’s Council of Economic Advisers touted on Fox News on May 12?

Biden economic adviser Cecilia Rouse told CNN on May 10 that the current inflation is “the consequence of mounting an effective response to the pandemic.” The same day, Transportation Secretary Pete Buttigieg skirted a question from CNN on whether Biden’s $1.9 trillion in extra spending caused any of the current inflation, responding that “historians and economists will be debating the early 2020s and what happened for many years and decades.”

The left has long had all sorts of tales about inflation. According to Bill Clinton Labor Secretary Robert Reich, lamenting recently that “the Fed is about to slow the economy,” inflation is the result of “the concentration of the American economy into the hands of a few corporate giants with the power to raise prices”—a theory that fails to explain why we managed to conquer inflation over the past four decades.

The late left-wing journalist William Greider of Rolling Stone, The Washington Post, and The Nation magazine, author in 1987 of the massive “Secrets of the Temple,” widely considered the best book describing the complexities of how the Federal Reserve works, downplayed the harms wrought by inflation.

The late 1970s, with prices soaring at over 13 percent, were “not the worst of times,” Greider argued. “In the entire history of the United States, there were only a few brief eras of what might be called ‘price stability.’ Each of those episodes was disastrous for many ordinary citizens–prices and incomes were too low.”

But Greider didn’t play the deceptive game that Biden and Sperling and Jared Bernstein are playing.

“What caused inflation?” Greider asked. “The recurring experience of inflationary spirals strongly suggested that the underlying source of these traumas lay not in economics but in politics–the choices made by government or, more precisely, choices that the government refused to make.”

The six major inflations in American history, the sixth being that of the 1970s, “followed the same pattern of behavior by the government–it mobilized the country and the economy by spending vastly more money than it collected in taxes,” he said.

Spending explains inflation, Greider concedes. But clearly, there is a piece missing; the federal government has spent nearly $100 trillion over the last 40 years, a period of relatively low inflation; but outlays as a percentage of GDP then suddenly skyrocketed to the highest level since the Second World War thanks to the COVID-19 lockdowns.

A robust private sector unharried by tax and regulatory overreach may well be a safeguard against serious inflation. But instead of easing off as we recover from the lockdowns, Biden has been pushing for over $5 trillion more in expenditures in his stalled Build Back Better scheme.

The president also endorsed the Federal Reserve’s timid monetary policy, saying that “the Fed should do its job and it will do its job, I’m convinced.”

Bernstein told Fox, “The fact that we have a Federal Reserve with Dr. Lisa Cook, the first black woman ever to be on a Federal Reserve Board, is, I think, a key achievement of Bidenomics … trying to make sure that this extremely important global economic institution looks a little bit more like some of the people that it’s representing.”

Racial diversity is the answer to inflation?

This president and his aides are adding derision to deception in their message to a long-suffering populace, and the backlash the Democratic Party will endure in November will be devastating.