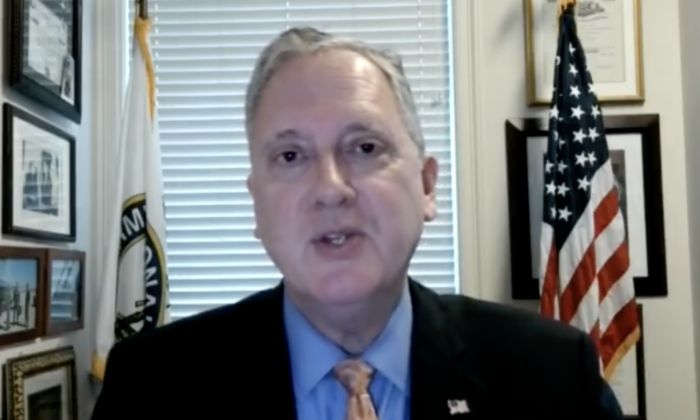 Chuck DeVore, vice president of the Texas Public Policy Foundation, in shown in this screenshot from his interview for NTD's "Capitol Report" program on July 6, 2022. (NTD)
Policies & Impacts

With recent polls showing that high gas prices are of primary concern to consumers and many experts forecasting gas prices going much higher in the near future, Chuck DeVore, vice president at the Texas Public Policy Foundation, said the Biden administration’s stance on fossil fuels isn’t helping.

“We don’t have a lot of rigs out working to pull up new oil and gas, so relative to historic highs, I think we’re about 30 percent below the peak,” DeVore said during a recent interview with NTD’s “Capitol Report” program.

“I think a lot of that has to do with the Biden administration’s very hardline stance against bringing new oil and gas online, at least in this country,” he said.

President Joe Biden reiterated this stance recently, saying his administration would not allow any new offshore oil and gas drilling.

In a July 1 press release, Department of the Interior Secretary Deb Haaland said the department is inviting the public to comment on what they want the U.S. oil and gas drilling program to look like over the next five years.

“Like the current program finalized in 2016, it removes from consideration the federal waters off the Atlantic and Pacific coasts while inviting public comment on 10 potential sales in the Gulf of Mexico and one in the Cook Inlet off south-central Alaska,” Haaland said. “A Proposed Program is not a decision to issue specific leases or to authorize any drilling or development.”

DeVore said it’s important to understand that the United States hasn’t had any oil or gas come out of any new rigs in either the Atlantic or Pacific oceans in decades.

DeVore said he wants readers to know that “especially on federal land, multiple permits and multiple approvals [are required] before you can bring a new oil or gas well online. So it’s not merely the leases. That’s just one of the many steps needed to begin to produce new oil and gas on federal lands,” he said.

Biden has blamed Russian President Vladimir Putin for rising gas prices, and accused oil companies and gas station owners of price gouging. The president even took to Twitter to rebuke gas station owners, telling them to reduce their prices.

“My message to the companies running gas stations and setting prices at the pump is simple: this is a time of war and global peril. Bring down the price you are charging at the pump to reflect the cost you’re paying for the product. And do it now,” said Biden in a July 2 Twitter post.

DeVore said this comment is nonsense because the profit margin for gas stations is very small, and it emboldened a Chinese Community Party official to praise Biden for the comment as proof that capitalism does not work.

Devore said Biden’s Twitter post “shows just how off-base the president’s comments have to be, given that Beijing praised them.”