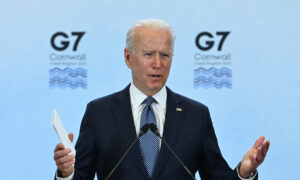 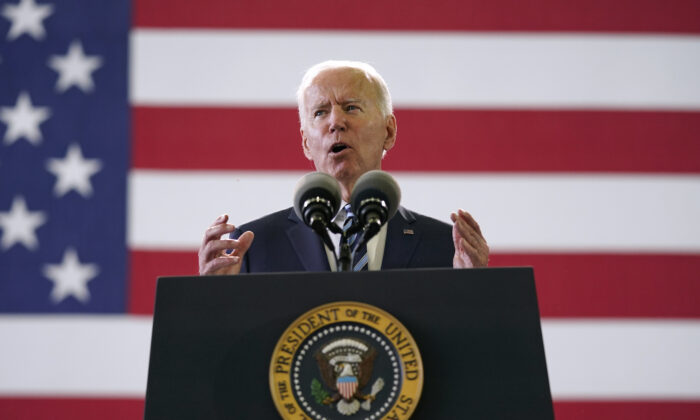 Continuing its broad effort to combat violence from homegrown extremists, the administration published the 32-page strategy and the president vowed to both address the violence and the factors that lead to domestic terrorism.

“We cannot ignore this threat or wish it away. Preventing domestic terrorism and reducing the factors that fuel it demand a multifaceted response across the Federal Government and beyond,” Biden said in the strategy’s introduction.

While domestic terrorist attacks have been a threat to the United States for centuries, officials with the National Strategy for Countering Domestic Terrorism said, a resurgence of the homegrown violence has been seen in recent years, including in the surge of attacks against Jews and the mass shooting at a Walmart in El Paso, Texas in 2019.

The domestic terrorists of today have a range of motivations, including racial or ethnic bigotry and anti-government sentiment. They can act alone or be part of small, informal groups. Some are part of larger networks.

“Across violent ideologies, individuals and small groups—both formal and informal—have been galvanized by recent political and societal events in the United States to carry out violent attacks. Among that wide range of animating ideologies, racially or ethnically motivated violent extremists (principally those who promote the superiority of the white race) and militia violent extremists are assessed as presenting the most persistent and lethal threats,” officials charged.

The strategy involves forging a government-wide effort, sharing information and training; exploring the designation of more groups as Foreign Terrorist Organizations, which would bar Americans from supporting the entities or receiving training from them; and cutting down on recruitment materials that circulate both online and in the real world.

There are also plans to augment the screening process for people who seek to join the military and federal law enforcement or a “position of trust” in the federal government. In addition, officials are working on analyzing people already in such positions to root out those “who would misuse that position in violation of law, including domestic terrorism-related activities.”

The FBI will be deeply involved in countering domestic terrorism. The bureau is expected to receive more funding in Fiscal Year 2022 to act more on the issue.

The strategy was informed by a March assessment by intelligence officials that dubbed domestic violence extremism as an elevated threat to the United States. Officials said in the assessment that biases against minorities and perceived government overreach would likely continue motivating domestic extremists, and expressed concern that newer sociopolitical developments, like allegations of fraud in the 2020 election, would “almost certainly” spur some extremists to try to carry out violence this year.

Responding to the assessment, plans to unveil the new domestic terrorism strategy, and other moves; Carly Gordenstein and Seamus Hughes, researchers at George Washington University’s Program on Extremism, said that “structural changes are underway that aim to root out extremism in and out of government, attempt to concentrate efforts more efficiently, and invest in the issue of domestic extremism at a rate that is unprecedented in the United States.”

Attorney General Merrick Garland, in an address on the new strategy on Tuesday, referenced the Jan. 6 breach of the U.S. Capitol, noting that over 480 people have been arrested for allegedly participating in the attack, as well as the shooting of Republican members of Congress on a baseball field in Virginia by a Democrat activist several years ago and the Walmart mass shooting.

“Such attacks are not only unspeakable tragedies for the victims’ loved ones, they are also a tragedy for our country—an attack on our core ideals as a society. We must not only bring our federal resources to bear, we must adopt a broader societal response to tackle the problem’s deeper roots,” he said.

The number of open FBI domestic terrorism investigations has increased significantly this year, he added, and the top threat stems from racially or ethnically motivated extremists, especially white supremacists.

Garland said officials are focused on violence, not on ideology, since in America espousing hateful ideology is not unlawful. He also emphasized that the Department of Justice remains “acutely aware” of the threat posed by foreign terrorists.

Ginamarie Ligon, director of the National Counterterrorism, Innovation, Technology, and Education Center, said that national security experts “have waited a LONG time for this (Tim McVeigh killed 168 people in my home state 26 years ago).”

“What a statement, we have our first strategy. Will watch eagerly to see what the implementation of these pillars brings,” she wrote on Twitter.

But Kyle Shideler, director for homeland security and counterterrorism for the Center for Security Policy, told The Epoch Times via email that the new strategy “might be better be described as an anti-1st and anti-2nd amendment strategy.”

“Rather than projecting a focus on actually detecting and preventing acts of terrorism, the Biden strategy repeatedly emphasizes combating what it describes as ‘misinformation’ on social media, and the possession of so-called ‘assault weapons’ and ‘high capacity magazines,'” he added.

“While hate crimes are obviously odious in the extreme, they do not meet the legal definition of terrorism,” he said, arguing the conflation “provides cover for the Biden Administration to promote its radical ‘equity’ agenda under the rubric of preventing terrorism.”

Also, the focus on “purging law enforcement and military ranks” in a counterterrorism strategy “again emphasizes that the Biden Administration is more concerned with pursuing wrong-think than it is pursuing dangerous terrorists,” according to Shideler.