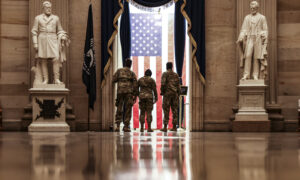 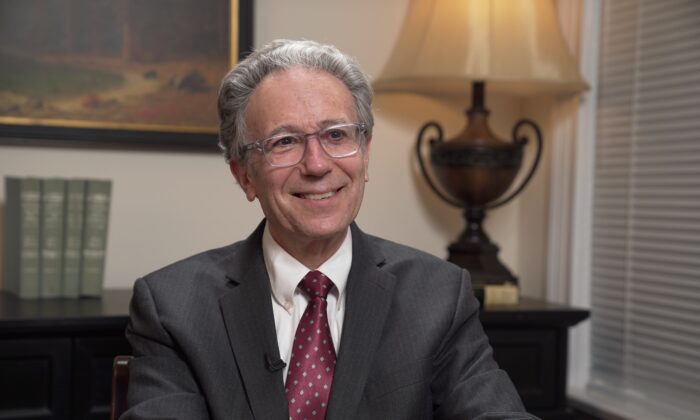 Within the first hour of Joe Biden’s presidency, the commander-in-chief fired a little-known figure running an agency that most Americans have likely never heard of.

Yet that firing was symbolically and substantively significant.

Its significance has only grown two months into an administration that has conferred legitimacy on the Chinese Communist Party’s (CCP’s) narratives with respect to America’s purported moral failings—providing it a major propaganda coup—and messaged still further weakness to our other adversaries.

The opening act in Biden’s purge of Trump administration officials was the sacking of Michael Pack. (Full disclosure: Pack is an acquaintance of mine going back to his time as president of the Claremont Institute, where I am a fellow.)

Pack, producer of more than a dozen Public Broadcasting Service documentaries on America, and past senior employee of U.S. international broadcasting entities, was an eminently qualified (pdf) choice for president of the U.S. Agency for Global Media (USAGM).

USAGM oversees five such networks, including perhaps most famously the Voice of America (VOA) and Radio Free Europe/Radio Liberty; it serves more than 350 million viewers in 100 countries and over 60 languages weekly. The executive branch agency is charged by law with, among other things, presenting U.S. government policy to the world, and providing a balanced and comprehensive view of critical issues, as part of its broader mission to promote freedom and democracy—particularly in those places lacking in such principles.

In that role, Pack threatened to do the unforgivable: adhere to the law by fairly presenting the Trump administration’s agenda to the world, rebalancing USAGM content away from progressivism, and confronting tyrannical regimes in the information battlespace.

Consequently, the political establishment, the administrative state that executes its agenda, and the corporate media that propagandizes on its behalf couldn’t tolerate Pack.

First, he was subjected to an interminably long, character-assassinating confirmation process that nearly ran out the clock on his appointment entirely.

Then, after being appointed, he found himself stymied at every turn. He was hit with lawsuits for making basic personnel decisions about who ought to run various organizations under his purview, and for reprimanding employees who injected rampant bias into USAGM content, in violation of the law. Such bias included producing what Pack described to me in a recent interview as a “repackaged Biden ad” that came out of the VOA’s Urdu service.

These moves again spurred not only legal action, but also drew the ire of the organization’s personnel, and the wrath of the media. So too did Pack’s internal security review, which found glaring gaps, for example, in the vetting of foreign employees, including from adversarial nations such as China and Iran. As Pack recounted, stunningly, “the USAGM is an agency of 4,000 people, and over the years, 1,500 had had improper security clearances—40 percent.”

Despite that the Office of Personnel Management (OPM) and the Office of the Director of National Intelligence issued several reports over the years highlighting this issue, USAGM leaders had cleared people who “made up false Social Security numbers, failed to file fingerprints, failed to complete forms.”

“It got to the point,” Pack said, where the OPM “revoked the ability of the agency to approve suitability clearances. … And after it was no longer allowed to grant these clearances, the agency granted them anyway. And this included, in addition to the 1,500 improperly cleared … a small but significant number of top-secret and above clearances.”

For having the temerity to seek to, among other things, re-clear this mass of employees, and remedy this major security failure, Pack faced a firestorm. This episode was illustrative of what transpired during his short tenure.

Pack’s firing represented the culmination of the more than three-year jihad waged against him. As Pack put it of his opponents, “They wanted to stop any person appointed by Donald Trump to fulfill any aspect of his agenda, and the people who are against Donald Trump have been ruthless in every capacity.”

The war on Pack was a microcosm of the broader effort to deprive the Trump administration of officials who would actually faithfully serve it.

And it had consequences that implicated national security going beyond the aforementioned malfeasance around security clearances.

It’s imperative to compete against foreign adversaries in the realm of ideas. Pack agrees, holding consistent with the Trump administration’s view, that “it is very important, and it’s particularly important now that China, especially, but also Iran and North Korea and others, are ramping up their own information efforts to put forward their vision of the world and their ideas and their story.”

“We need to sort of push back and put a positive view of what our ideas and our principles are,” he said.

He had pledged to do so, and now he won’t get that chance.

Specifically on China, he had also sought “to sort of put more attention to internet firewall circumvention technology and tools”—that is, to evade China’s “Great Firewall.” For this, too, he faced criticism for challenging the USAGM’s “costly, inefficient manner” by which it had pursued such efforts in the past.

It’s unclear what, if anything, the Biden administration will do in connection with that effort.

In the realm of information, the administration has removed large troves of content from the State Department website aimed at exposing the Chinese Communist Party’s malign actions.

It has delinked the CCP from the coronavirus and refused to declare that it will punish the regime for its deceitful and more dastardly acts in connection with the pandemic.

And as alluded to previously, when Secretary of State Antony Blinken and national security adviser Jake Sullivan’s CCP counterparts lambasted America for its purported human rights failings—those frequently raised by our nation’s left—their response was to concede the premise, but call it a strength that we could recognize our failings and seek to be better.

Beyond the fact that the Trump administration likely would have never held such a meeting, the executive branch almost certainly would not have acceded to this narrative. One can bet that the USAGM under Pack would have fought it, and exposed it for the propaganda that it was.

Instead, we are likely to see a reversion to the status quo ante, of a U.S. government media operation that speaks not for Americans, but in effect, for our adversaries. The best that can be said is that it will likely do so consistent with the executive it is supposed to serve.

Ben Weingarten is a fellow of the Claremont Institute and co-host of the Edmund Burke Foundation’s “The NatCon Squad.” He is the author of “American Ingrate: Ilhan Omar and the Progressive-Islamist Takeover of the Democratic Party” and is currently working on a book on U.S.–China policy and its transformation under the Trump administration.