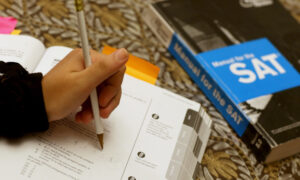 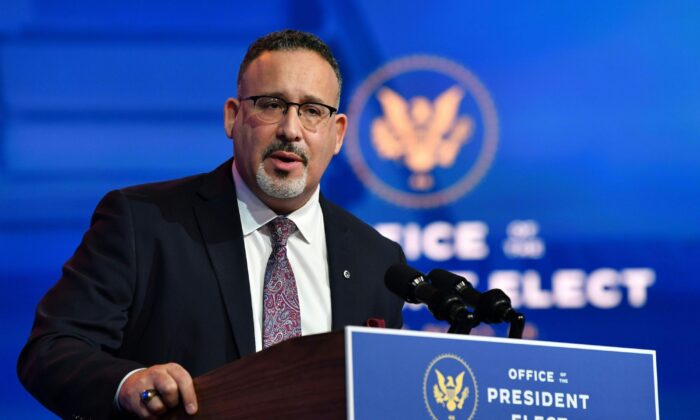 Miguel Cardona speaks during an event announcing his nomination at The Queen in Wilmington, Del., on Dec. 23, 2020. (Nicholas Kamm/AFP via Getty Images)
Executive Branch

Miguel Cardona, President Joe Biden’s nominee to the Education Department, said he will prioritize cancelling student loan debt and offer tuition-free community college education once he is confirmed by the Senate.

Cardona, who was named Connecticut’s K-12 school chief last August, would be facing a number of issues on his first day as Education secretary, mainly fulfilling Biden’s campaign promises on higher education, which include making public colleges and universities tuition-free for all families with incomes below $125,000, and a broad cancellation of student loan debt.

“While I do have a pre-K-12 background—and that’s an area of passion for me—I recognize as a first-generation college student myself the importance of higher education and the importance of making it accessible,” Cardona said Monday during a 30-minute interview with Connecticut Public Radio.

When asked if he supports Biden’s plan to make tuition at community colleges free, Cardona said he is “100 percent” in favor of the proposal, and that he expects community colleges to become a more important pathway to higher education.

“We have to blur the lines between our pre-K-12 system and our higher education system, and make them more seamless,” Cardona said. “From the perspective of the consumer of education, it has to be clearer, it has to be an easier reach. Community colleges play that role.”

“We really have to make it more accessible, not only for our pre-K-12 system connection but also there are a lot of adults in our communities who would welcome an opportunity to engage in higher learning through community colleges, or they think about career advancement and all they need is that first step into the community college,” he added.

Cardona also expressed support for Biden’s proposal to wipe out $10,000 in student debt for all borrowers.

“I would work with our senators and our Congress folks to support a plan that provides some relief for our students in higher education,” he said, adding that they would make sure the relief targets students that are most in-need.

“Across-the-board forgiveness of college debts is not only unfair to most Americans, it is also the most regressive of policy proposals—rewarding the wealthiest sector of our labor force at the expense of the poorest,” DeVos wrote. “And it’s even more unfair to those who have held up their end of the bargain and paid back their student loans themselves to subsidize those who don’t save, plan, and pay.”