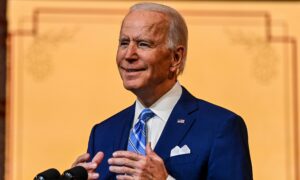 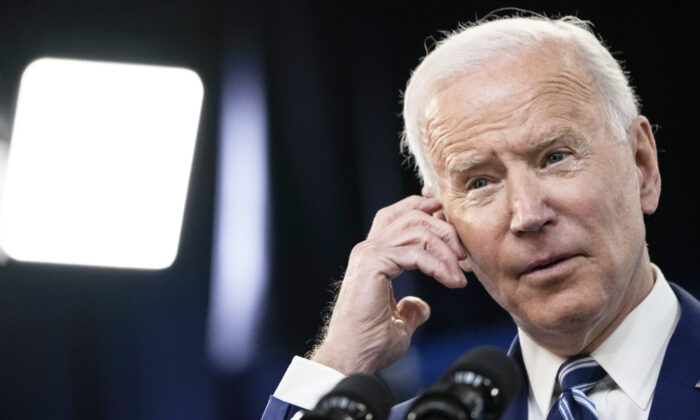 U.S. President Joe Biden delivers remarks on the COVID-19 response and the state of vaccinations in the South Court Auditorium at the White House complex in Washington on March 29, 2021. (Drew Angerer/Getty Images)
Executive Branch

Biden’s Dog Involved in Another Biting Incident at White House

One of President Joe Biden’s dogs has been involved in a biting incident, weeks after causing injury to a person on White House grounds.

Major, the family’s younger dog, “nipped someone while on a walk” on Monday, Michael LaRosa, press secretary to First Lady Jill Biden told The Associated Press, adding that the dog “is still adjusting to his new surroundings.”

Two people with knowledge of the incident told CNN that Major, a three-year-old German shepherd, bit a National Park Service staff member on the White House South Lawn while they were working, and that the employee required medical attention from the White House medical unit (WHMU).

“Yes, Major nipped someone on a walk. Out of an abundance of caution, the individual was seen by WHMU and then returned to work without injury,” LaRosa told CNN.

The dog had been seen by reporters on a walk around the White House South Lawn before the president and first lady traveled to the Vietnam Veterans Memorial early Monday evening.

Major had only just returned to the White House last week, along with his sibling Champ, after causing a minor injury to an employee of the U.S. Secret Service on March 8.

White House press secretary Jen Psaki said of the March 8 incident that Major “was surprised by an unfamiliar person, and reacted in a way that resulted in a minor injury to the individual, which was handled by the White House medical unit with no further treatment needed.”

Major and Champ were subsequently moved to the Bidens’ home in Delaware. Psaki said at the time that their relocation was previously planned.

“It had been previously planned already for the dogs to be cared for by family friends in Delaware during Dr. Biden’s travels to military bases this week,” Psaki said, referring to the first lady.

“She has a three day trip this week, and the dogs will return to the White House soon,” Psaki added. The dogs, she said, “are still getting acclimated and accustomed to their surroundings and new people.”

The president moved the dogs into the White House shortly after he was sworn into office on Jan. 20. Biden posed with the dogs in a recent Oval Office photograph, which was captioned: “Not many people have Oval Office walk-in privileges. Happy to report that these two are on the list.”

The Bidens adopted Major from the Delaware Humane Association in 2018.

President Joe Biden earlier this month told ABC News that Major was in the process of being trained at his Delaware home.

“You turn a corner, and there’s two people you don’t know at all. And [Major] moves to protect,” the president said. “But he’s a sweet dog. Eighty-five percent of the people there love him. He just—all he does is lick them and wag his tail. But … I realize some people, understandably, are afraid of dogs to begin with.”