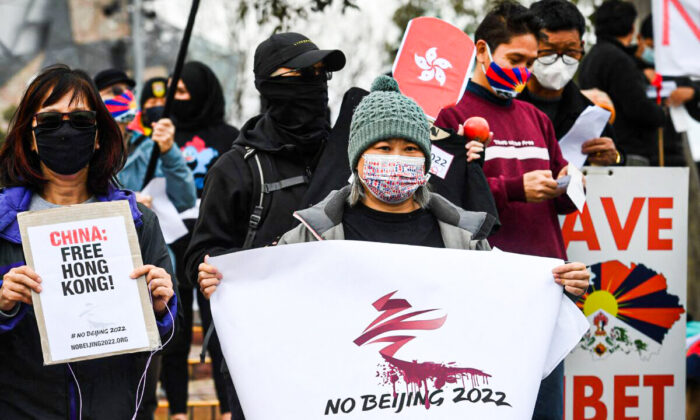 Activists including members of the local Hong Kong, Tibetan, and Uyghur communities hold up banners and placards in Melbourne on June 23, 2021, calling on the Australian government to boycott the 2022 Beijing Winter Olympics over China's human rights record. (William West/AFP via Getty Images)
US-China Relations

A group of U.S. lawmakers and former U.S. officials are calling on the Biden administration to do more than just imposing a diplomatic boycott of the 2022 Beijing Winter Olympics.

The diplomatic boycott was announced by White House press secretary Jen Psaki on Dec. 6, saying that Washington “cannot proceed with business as usual” in the face of the communist regime’s “ongoing genocide and crimes against humanity.” The boycott means that the United States won’t send an official delegation to China for the games but U.S athletes will still compete in the competition.

The 2022 Winter Olympics are scheduled to start in China’s capital of Beijing on Feb. 4 next year.

Some Republicans—including Sen. Tom Cotton (Ark.), Rep. Mike Gallagher (Wis.), and Rep. Carlos Gimenez (Fla.)—said the Biden administration should opt for a full boycott instead, meaning that U.S. athletes would also not participate in the games.

“Authoritarian regimes have a long history of using the Olympics to whitewash human rights abuses, and the U.S. should do everything in its power to prevent the CCP [Chinese Communist Party] from pocketing this massive propaganda victory,” Gallagher said in a statement.

“For the millions of the CCP’s victims–and for the health and safety of U.S. athletes–a diplomatic boycott is not enough.”

What’s more, Gallagher argued that a full boycott has become necessary given that the International Olympic Committee (IOC) “has lost all credibility to guarantee the well-being” of U.S. athletes over the way it has addressed Chinese tennis star Peng Shuai’s allegations of sexual assault against a former high-ranking CCP official.

After posting the allegations online on Nov. 2, Peng went missing for two weeks. After her reappearance on China’s state-run media, the IOC has held two video calls with her; the latest call on Dec. 1. However, critics have said the calls are inadequate for ensuring her safety, since she can be intimidated or coerced while in China.

Also on Dec. 1, the Women’s Tennis Association (WTA) announced that it is suspending tournaments in China and Hong Kong due to its concerns for Peng’s wellbeing.

“I’m glad to see the Biden Administration take steps to hold China accountable, but this diplomatic boycott does not go far enough,” Ryan wrote on Twitter, pointing to how Chinese regime has continued to “stonewall” investigations by the World Health Organization into the origins of the CCP virus, the pathogen that causes the disease COVID-19.

Ryan added, “China has demonstrated again and again that they do not deserve the honor associated with hosting the Olympics, and the Games should be hosted elsewhere.”

A recent poll by the Ronald Reagan Institute showed that the majority of Americans supported either a full boycott (47 percent), or delaying and relocating the games (60 percent).

“The CCP doesn’t give a rip about a diplomatic boycott, because at the end of the day, they are still hosting the world’s athletes,” Pompeo wrote. “Joe Biden needs to stand up to the CCP.”

Haley wrote, “A diplomatic boycott of the Beijing Olympics is a joke. China doesn’t care if Biden and Team show up. They want our athletes.”

In a statement, the IOC said, given its policy of “political neutrality,” that it respected Washington’s decision.

On Dec. 6, before Washington announced its diplomatic boycott, China’s foreign ministry spokesperson, Zhao Lijian, threatened the United States with “resolute countermeasures” if a diplomatic boycott were to take place, without elaborating on details.

A spokesperson for the Chinese Mission to the U.N. called the U.S. diplomatic boycott a “self-directed political farce.”

The next day, China’s state-run media outlet CGTN reported on Twitter that the United States “will pay a price for its wrongdoing.”

At the time of writing, Beijing has not outlined any retaliatory actions against the United States.

“Through a diplomatic boycott, we can both cheer the U.S. Olympic Team to gold while staying true to our values of liberty and human rights,” stated Sen. Edward Markey (D-Mass.) according to a statement from his office.

In a statement, Sen. Chris Coons (D-Del.) wrote, “I’m glad that President Biden is placing human rights at the center of American foreign policy, and I hope other nations and corporate sponsors will consider joining this boycott.”

“The Chinese government’s systematic, ongoing, and egregious violations of religious freedom and other human rights of Uyghur Muslims, Tibetan Buddhists, Christians, Falun Gong practitioners, and many others betray the Olympic spirit,” stated USCIRF vice chair Nury Turkel in a statement.

“In fact, a genocidal regime should not have been granted the privilege to host the Olympics in the first place,” he said.

Sam Brownback, former U.S. ambassador-at-large for international religious freedom, previously said that the CCP is “at war with faith”—a campaign that the communist regime has waged for 100 years.

A coalition of groups—including the World Uyghur Congress, Students for a Free Tibet, and Hong Kong Democracy Council—together known as No Beijing 2022, released a joint statement welcoming the U.S. boycott as a first step.

“While we welcome the announcement by the U.S. as an important first step in ensuring that the international community stops legitimising the Chinese government’s genocide and crimes against humanity, we continue to urge governments around the world to take further bilateral and multilateral action,” the coalition stated.

The United States is not the first country to announce a diplomatic boycott of the 2022 Games. Last week, Lithuania announced that its diplomats will boycott the games.

Lithuania is involved in a diplomatic row with China, after the Baltic nation decided to allow Taiwan to open a de facto embassy in its capital Vilnius, using Taiwan’s own name. In retaliation, Beijing downgraded its diplomatic ties with Lithuania.

Sophie Richardson, China director at HRW, took to her Twitter account to say that the U.S. government needed to do more.

“The U.S. should now redouble efforts with like-minded governments to investigate and map out pathways to accountability for those responsible for these crimes and justice for the survivors.”