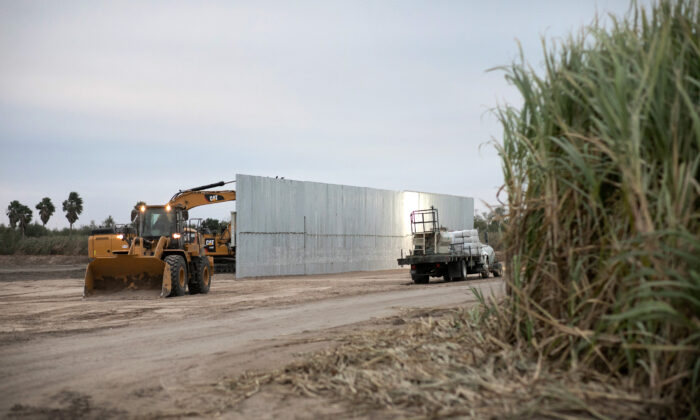 A loader grades land near a section of privately built border wall under construction near Mission, Texas, on Dec. 11, 2019. (John Moore/Getty Images)
By Jack Phillips

The Department of Homeland Security (DHS) said on July 23 that it has canceled two contracts to construct 31 miles of border wall in the Laredo, Texas, immigration sector along the U.S.–Mexico border.

Homeland Security claimed that the two canceled border barrier contracts “are not necessary to address any life, safety, environmental, or other remediation requirements.” The contracts were previously funded with the agency’s 2020 fiscal year appropriations, a statement from the agency said.

Construction and land acquisition for the two canceled Laredo projects hasn’t begun, though the DHS said it would carry out environmental planning surrounding the two projects.

But a statement from the agency announcing the move appears to have left the door open for some border projects in the sector.

“DHS continues to review all other paused border barrier projects and is in the process of determining which projects may be necessary to address life, safety, environmental, or other remediation requirements and where to conduct environmental planning,” the agency stated.

The Biden administration has called on Congress to vote to cancel remaining border wall funding. The DHS made note of the calls in the statement, saying that Congress should provide funding for “smarter border security measures,” such as certain forms of technology and modernizing ports of entry.

During his first week in office, President Joe Biden issued an executive order halting the construction of the border barrier, which was championed by former President Donald Trump during his 2016 campaign. In four years, Trump’s administration constructed about 450 miles of the border wall. After leaving office, the former president has sharply criticized the Biden administration for stopping the project.

In addition to the order canceling the wall, Biden has authorized dozens of other immigration-related orders that have been denounced by Republicans and some Democrats, who say the orders and accompanying White House messaging on immigration has led to a surge of illegal immigrants along the U.S.–Mexico border.

More than 188,000 people who crossed the border illegally were apprehended in June, according to Border Patrol data, representing an increase over May’s apprehension figures. Border Patrol agents also recovered about 109 bodies along the border in June, up from 61 in May.

Biden previously said that halting wall construction is necessitated because it’s a waste of money and isn’t effective.

“Like every nation, the United States has a right and a duty to secure its borders and protect its people against threats. But building a massive wall that spans the entire southern border is not a serious policy solution,” Biden said several months ago. “It is a waste of money that diverts attention from genuine threats to our homeland security.”