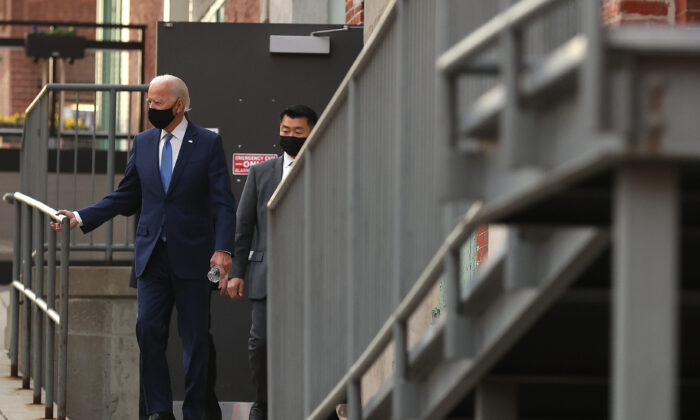 Democratic presidential nominee Joe Biden and his wife separately deflected questions about Biden’s son after it was disclosed that Hunter Biden is under investigation by federal authorities.

During a press conference in Wilmington, Delaware, on Friday, Joe Biden was asked if his son, Hunter, 50, committed a crime.

A day prior, aides with the Democrat’s team stepped in front of cameras and shooed reporters away after his wife, Jill Biden, was asked about Hunter. Hunter is Biden’s son from his first marriage to Neilia who was killed in a car accident with her daughter.

“Joe Biden stood on that debate stage and said no, my son did not make any money from China. He looked the American people in the face and he lied to them,” added Jason Miller, a President Donald Trump campaign adviser, during an appearance on Fox News on Friday.

The Biden team, which didn’t respond to a request for comment, has released a single statement from Joe Biden, saying he “is deeply proud of his son, who has fought through difficult challenges, including the vicious personal attacks of recent months, only to emerge stronger.”

Hunter Biden said he’s under investigation for his taxes. The probe is reportedly broader, including reviewing his dealings with China.

Joe Biden is accused of lying when he insisted he never discussed his son’s business dealings. Tony Bobulinski, Hunter Biden’s former business partner, said he met with Joe Biden several years ago about a pending deal with Chinese businessmen and that Hunter Biden proposed a business arrangement that would give the elder Biden 10 percent of the proceeds.

“I think that Joe Biden and the Biden family are compromised. Obviously, I’ve referenced I’ve held a Q-clearance—you’re briefed on compromise and who you’re able to talk with and deal and do business with—and I just don’t see, given the history here and the facts, how Joe can’t be influenced in some manner based on the history that they have with CEFC,” Bobulinski said in October, referring to a Chinese energy conglomerate.

Text messages obtained by The Epoch Times showed Hunter Biden had a close relationship with Ye Jianming, the founder of CEFC.

Joe Biden also appeared to be involved with his son’s dealings with Ukraine. A leaked email published earlier this year showed Vadym Pozharskyi, a top executive from Ukrainian gas firm Burisma, thanking Hunter Biden for inviting him to Washington giving him an opportunity to “meet your father.”

Burisma employed Hunter Biden while his father was vice president and the Obama administration’s point man on Ukraine. Joe Biden bragged in 2018 that he threatened to withhold money from Ukraine unless it ousted a prosecutor who was probing Burisma.

Joe Biden and Biden’s team have repeatedly criticized reporting on Hunter Biden and repeatedly said there was no wrongdoing.

Joe Biden called it “crass” to report on his son during the campaign. During the first presidential debate, he claimed that all reports were “discredited” when pressed by Trump. He also claimed, without evidence, that the reports stemmed from Russian disinformation.

Moderator Chris Wallace cut off the line of questioning.