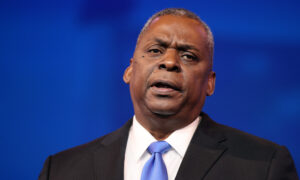 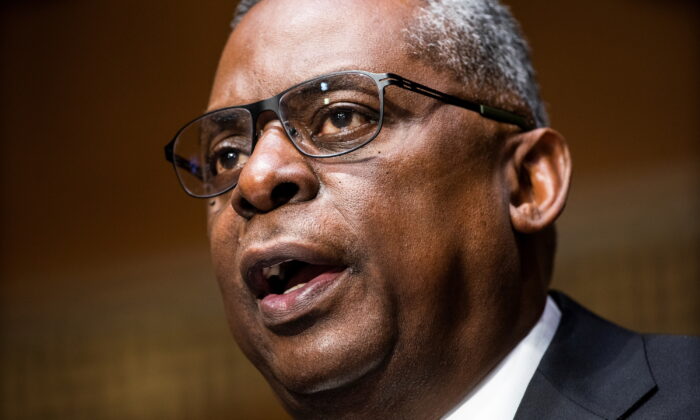 Retired Gen. Lloyd Austin prepares to testify before the Senate Armed Services Committee during his confirmation hearing to be the next secretary of defense, in Washington on Jan. 19, 2021. (Jim Lo Scalzo/Pool via Reuters)
Executive Branch

Retired Army Gen. Lloyd Austin said on Tuesday that, if confirmed as President-elect Joe Biden’s defense secretary, he would work to rid the ranks of the Department of Defense from “racists and extremists.”

Austin made the remarks at a Jan. 19 hearing with the Senate Armed Services Committee on Capitol Hill.

Saying that we “owe our people a working environment free of discrimination, hate, and harassment,” Austin vowed to “fight hard to stamp out sexual assault, to rid our ranks of racists and extremists, and to create a climate where everyone fit and willing has the opportunity to serve this country with dignity.”

“The job of the Department of Defense is to keep America safe from our enemies. But we can’t do that if some of those enemies lie within our own ranks,” Austin told the panel.

Pentagon data shows that around one in five active duty members of the U.S. military (17.9 percent) experienced racial harassment or discrimination in the 12 months prior to taking a 2017 survey (pdf), whose results were released only recently. Racial or ethnic harassment or discrimination was found to affect all groups of service members, with the total minority (24.4 percent) more likely and white members (12.7 percent) less likely to fall prey to such behavior.

At the same time, the findings also show that the majority of military members expressed positive views of the climate for diversity and inclusion in their services. Most military members “describe their work climate as inclusive, have good relationships with coworkers and supervisors, and are comfortable interacting with diverse personnel. They generally denied problems with hate crimes, gangs, and racist/extremist organizations at their duty station as well,” the report said.

Members also generally agreed that workgroup members “are treated as valued members of the team without losing their unique identities (80 percent), empowered to make work-related decisions on their own (71 percent), and have outcomes fairly distributed among them (69 percent).”

Also, a solid majority of members (77 percent) indicated they can use their chain of command to address concerns about discrimination without fear of retaliation or reprisal, while significant majorities said they did not feel targeted by discriminatory behavior.

During the hearing, Sen. Tim Kaine (D-Va.) cited some of the statistics on discrimination from the 2017 Pentagon report, and asked Austin what could be done to combat these types of behaviors.

Calling the issue something that you can’t “put a Band-Aid on and fix and leave alone,” Austin said military leaders “need to be able to talk to their subordinates and instill in them the right types of values.”

“Being engaged more with your people on these types of issues can pay big dividends,” he said, “but I don’t think you can ever take your hand off the steering wheel.”

Besides needing a confirmation nod from the Senate, Austin needs a congressional exemption from both the House and Senate from a law that bars retired active-duty officers from serving in the top Pentagon job within seven years, a rule meant to safeguard civilian control of the U.S. armed forces. Austin would require the congressional waiver since he has not been out of uniform long enough. The Democratic-led House of Representatives is expected to vote on Thursday on whether to grant the waiver, according to the chamber’s schedule.

At the hearing, Austin sought to assure lawmakers that he would take steps to ensure civilian control of the military remained intact.

“I intend to surround myself with and empower experienced, capable civilian leaders who will enable healthy civil-military relations, grounded in meaningful oversight,” he said.