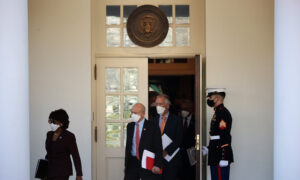 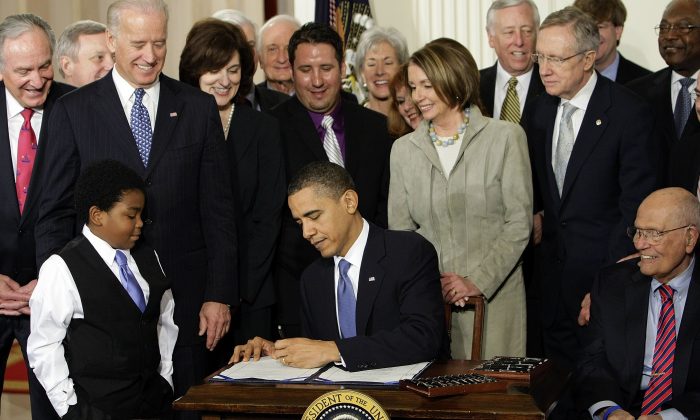 WASHINGTON—Democrats are racing to pass President Joe Biden’s economic relief bill by mid-March, amid doubts about the price tag of the package. Buried in the $1.9 trillion stimulus bill is an expansion of Obamacare insurance subsidies, which could provide thousands of dollars to wealthy families who have been least hit by the pandemic, according to critics.

Democrats aim to make the Affordable Care Act’s (ACA) premium subsidies available to more people through the end of 2022. It also expands the amount of those subsidies for currently eligible people.

The revised structure makes the subsidies much larger for older people and those with higher incomes, according to Brian Blase, senior fellow at the Galen Institute and former special assistant to former President Donald Trump at the National Economic Council.

The proposed change in the plan, “recklessly boosts federal subsidies for health insurance in a way that exacerbates tax inequities, substantially replaces private spending with government spending, reduces incentives for work and productivity, and significantly adds to already unsustainable family and government health care expenditures,” Blase wrote in a report.

He estimated that a family of four with a 60-year-old head of household and income of $159,000 a year, would qualify for an annual subsidy of $15,868 under the Democratic proposal.

Biden’s relief bill makes Obamacare subsidies available to more people by removing the income cap on subsidy eligibility. Currently, subsidies are available only to people with income below 400 percent of the federal poverty level—$51,520 for an individual and $106,000 for a family of four. The proposal also reduces a person’s maximum spending on premiums for benchmark coverage to 8.5 percent of income from 10 percent.

Removing the “subsidy cliff” would benefit people living in states with high premiums, according to a report by the Kaiser Family Foundation.

The report shows that a 60-year-old with $55,000 income living in Wyoming, West Virginia, South Dakota, Nebraska, Connecticut, or Alabama would see a premium saving of more than 70 percent on a benchmark plan.

“Because Obamacare premiums rise with age, most of the benefit from this change will accrue to households in their 50s and 60s, often in their peak earning years and with considerable accumulated savings,” according to Chris Jacobs, a health policy expert and CEO of Juniper Research Group.

In an article in the Federalist, Jacobs argued that the expansion of subsidy would reduce the incentive to work because “some households can lose thousands of dollars in insurance subsidies by going one dollar over the cliff.”

House Speaker Nancy Pelosi (D-Calif.) pushed back against the criticisms, saying that the provision will make the subsidies available to the people in the next income tier temporarily.

“It’s not about wealth,” Pelosi said, rebuking Republicans who call it a subsidy for wealthy people.

“They ought not to be complaining about some people making a little more money, getting a subsidy,” she said.

The U.S. Senate is expected to vote this week on the Biden administration’s $1.9 trillion stimulus bill. On the afternoon of March 4, Vice President Kamala Harris broke a 50-50 tie to begin Senate debate on the measure.

The Congressional Budget Office estimated that the proposal to expand ACA subsidies for two years would cost $34.2 billion.

But that’s just the beginning, according to The Wall Street Journal editorial board.

“The politics are such that the benefit will never be revoked. The more generous subsidies will be captured by insurers, who will continue to raise premiums, and the specter of high costs will push lawmakers to intervene again,” The Journal’s editorial board wrote last month.

Critics argue that once enacted, there will be political pressure to make the temporary expansion permanent, which will lead to greater budgetary cost.