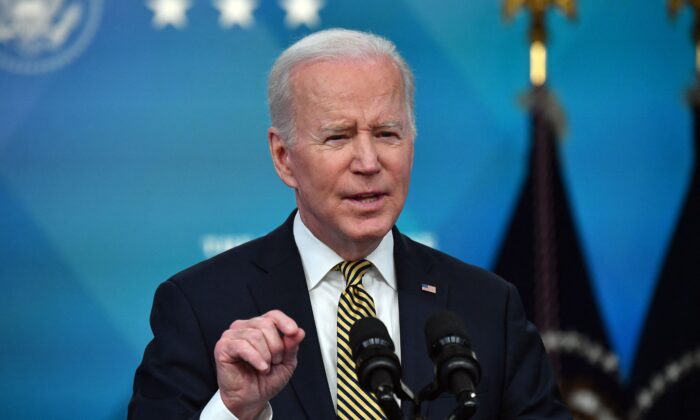 President Joe Biden speaks about Ukraine in the South Court Auditorium of the Eisenhower Executive Office Building next to the White House on March 16, 2022. (Nicholas Kamm/AFP via Getty Images)
Economic Policies

WASHINGTON—President Joe Biden released his $5.8 trillion budget for fiscal year 2023 on March 28, including significant funding for law enforcement, in an effort to set himself apart from progressives in his party who have advocated for defunding the police.

Biden’s budget allocates $3.2 billion in discretionary funds for state and local grants, as well as $30 billion in mandatory funds to “support law enforcement, crime prevention, and community violence intervention,” according to the White House.

There will be more community police officers on the streets across the country under this plan, White House officials said. The plan also proposes to increase the capacity of federal law enforcement agencies such as the FBI and the U.S. Marshals Service to fight violent crime.

As part of his 2023 budget, Biden is also asking Congress to approve legislation that requires the richest U.S. families to pay a minimum of 20 percent on all of their income, including capital gains on unsold assets such as stocks. Capital gains are only taxed when they’re realized—when the assets are sold—under current law.

Biden’s “Billionaire Minimum Income Tax” will make the U.S. tax code more equitable, while also reducing the deficit by $360 billion over the next 10 years, according to the White House.

Only the wealthiest 0.01 percent of U.S. households (those worth more than $100 million) will be subject to the tax, according to the plan. Households earning more than $1 billion will account for more than half of the revenue, the White House stated in a fact sheet.

“It is already clear that this proposal would make the tax code more complicated and may not effectively accomplish the goal of proponents who seek to raise tax rates on those with very high net worth and incomes,” Watson told The Epoch Times.

“It will help us address the soaring inequality we see in this country and make the tax code fairer, more adequate, and more sustainable,” Amy Hanauer, executive director at the ITEP, said in a statement. “This plan offers a transformational and long-overdue change.”

In addition, the White House has proposed raising the corporate tax rate to 28 percent from its current rate of 21 percent and increasing the top individual tax bracket to 39.6 percent from 37 percent.

The budget also focuses on “confronting global threats,” proposing $773 billion for the Department of Defense, compared to $728.5 billion provided in discretionary spending in 2022.

“To sustain and strengthen deterrence, the Budget prioritizes China as the Department’s pacing challenge,” the White House stated.

The budget also includes nearly $1.8 billion for the State Department and USAID “to support a free and open, connected, secure, and resilient Indo-Pacific Region and the Indo-Pacific Strategy,” as well as $400 million for the “Countering the People’s Republic of China Malign Influence Fund.”

“I’m calling for one of the largest investments in our national security in history, with the funds needed to ensure that our military remains the best-prepared, best-trained, best-equipped military in the world,” Biden said in a statement.

Biden is also advocating for continued investment to “forcefully respond” to Putin’s actions against Ukraine by providing economic, humanitarian, and security assistance to Kyiv, Ukraine. The budget allocates roughly $682 million in aid to Ukraine.

In February, Congress approved a $13.6 billion supplemental funding measure to provide humanitarian and security assistance to Ukraine as part of the 2022 budget plan.

Biden’s budget proposal is mostly a wish list, as the 12 appropriations measures that fund the government are ultimately approved by Congress. Hence, the president’s budget mainly serves as a messaging tool for the administration.

According to the White House, Biden’s budget plan would reduce the federal deficit by more than $1 trillion over the next decade.