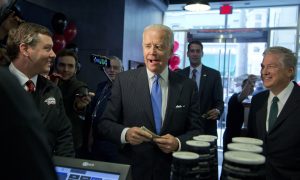 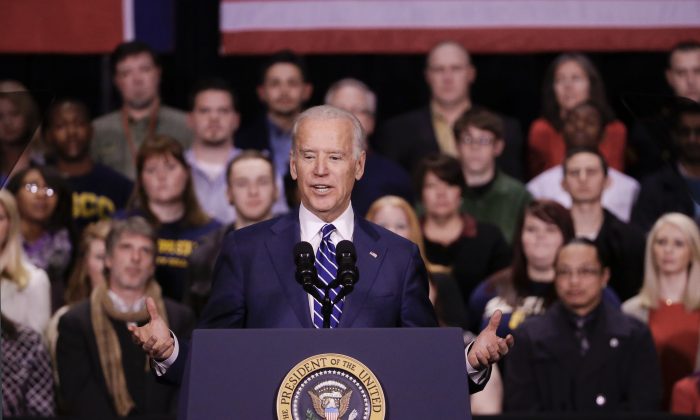 Biden’s a Long Shot to Beat Hillary, but He Still Might Go for It

Hillary may finally have a challenger in the 2016 Democratic primaries.

The morning after Obama’s State of the Union Address, Vice President Joe Biden said he may run for president in 2016.

“There’s a chance, but I haven’t made my mind up about that, we’ve got a lot of work to do between now and then. There’s plenty of time,” Biden said on ABC’s ‘Good Morning America.’ I don’t think you have to make up your mind until the summer. I think this is wide open on both sides.”

Of the possible contenders for the 2016 Democratic ticket, Biden is the only candidate with a popular following that hasn’t ruled out running for president. Sen. Elizabeth Warren (D-Mass.), the only other candidate to draw popular support among polls of likely primary voters larger than the margin of error, has gone on the record promising not to run in 2016.

I don’t think you have to make up your mind until the summer.
— Joe Biden

Biden faces impressively long odds if he does choose to run. According to a Monmouth University Poll from December, Clinton is the first choice for 48 percent of likely primary voters. Warren is the No. 2 choice with 6 percent of voters, and only 2 percent said that Biden was their first choice.

Among the seven different candidates voters were asked about in the poll, Biden had the highest unfavorable rating, at 34 percent of primary voters, whereas Clinton only had an unfavorable rating of 11 percent.

Biden also lacks the network of donors and political alliances that Clinton has cultivated over the years, and few, if any, see him as a serious opponent for Hillary.

Still, primaries have historically proven to be unpredictable affairs. Obama himself was still a dark-horse candidate in early 2007, trailing Clinton in the fall  by as much as 25 points in some polls.

Howard Dean, who at the beginning of his 2004 presidential campaign had far less national recognition than Biden does now, was briefly the front-runner in the primary before losing to Kerry.

Yet Biden has already ran for president twice and dropped out both times, both marred by the scandals and gaffes typical of an undisciplined candidate. He dropped out of the race in 1987 after reports charged him of plagiarizing a British politician, and in 2006 fumbled with a callous remark about Indian-Americans.

Biden’s recent behavior hasn’t suggested a transformation of persona needed to field a successful presidential campaign. As vice president, when Biden draws attention, it’s usually as an object of ridicule. Sen. Chris Coons (D-Del.) had to defend Biden on television in early January after a video emerged of Biden unsuccessfully trying to plant a kiss on the cheek of Coons’s daughter, who was visibly uncomfortable at the swear-in ceremony.

“I could hear him, he was leaning forward and whispering some encouragement to her about how when he was sworn in, his own daughter Ashley was 13 she felt awkward and uncomfortable.