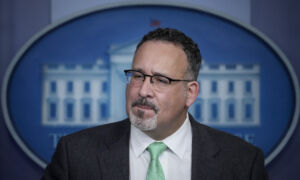 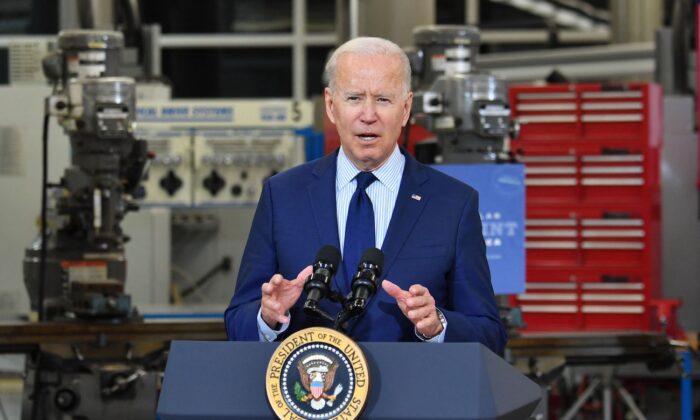 President Joe Biden on Friday sent Congress a $6 trillion budget proposal that would spend big on infrastructure, climate change, and social welfare packages, while creating projected deficits of at least $1.3 trillion per year until 2030.

If passed, the plan, which faces strong opposition from Republican lawmakers, would become the biggest sustained government spending since World War II.

Biden in the budget message argued against “trickle-down economics” as he laid out his administration’s investments that calls for some $6.01 trillion in spending, bringing together the $2.3 trillion American Jobs Plan and the $1.8 trillion American Families Plan he had already announced, as well as about $1.5 trillion in discretionary spending for fiscal 2022, and other mandatory spending programs.

The blueprint maps out some $4.17 trillion in revenues, thereby projecting a $1.84 trillion deficit—a sharp decrease from the past two years because of the COVID-19 pandemic—but up from 2019’s $984 billion.

The American Families Plan consists of about $1 trillion in investments and $800 billion in tax cuts and credits for families and workers. The new spending proposal focuses on expanding the welfare state by providing access to education, child care, and more. Child care support receives the most funds under the plan.

The Democratic president proposed to increase taxes on high-income households to pay for the spending.

Biden said in the budget message (pdf) that the budget proposal “reflects the fact that trickle-down economics has never worked, and that the best way to grow our economy is not from the top down, but from the bottom up and the middle out.”

House Speaker Nancy Pelosi (D-Calif.) welcomed the proposal. In a statement, she called Biden’s budget “an unequivocal declaration of the value that Democrats place on America’s workers and middle-class families, who are the foundation of our nation’s strength and the key to Build Back Better.”

But Republicans, including Senate leader Mitch McConnell (R-Ky.), criticized the plan, calling it more of the same “far-left economics that ignore reality” and hurts Americans through inflation.

“It’s amazing how little all this taxing, printing, and borrowing would actually net American families,” McConnell said in a statement, noting that the Biden-backed $1.9 trillion COVID relief package had slowed rehiring.

“The money would just disappear into a million mediocre socialist daydreams, from electric car subsidies to work-discouraging welfare programs to Washington-directed childcare plans that would put politicians’ thumbs on the scales of family decisions,” he added.

White House officials said tax increases would start to chip away at deficits after 2030, reported Reuters.

“Even after the massive tax hikes Democrats want to force on the American people, they’d still have the government running trillion-plus-dollar deficits every year,” he said.

“Democrats want to borrow and spend on a scale that America has not seen since we had to fight and win World War II,” he said, adding, “Our debt burden would break all records, eclipsing even the 1940s.”

McConnell said the budget, which touts a 2.7 percent pay rise for troops, “would actually cut funding for our Armed Forces after inflation and leave us less safe.” It would also shift billions in spending from old systems to help pay to modernize the nuclear arsenal to deter China.

House Republican Leader Kevin McCarthy (R-Calif.) said in a statement that the budget “does not provide the resources necessary to counter the ‘diverse array of threats’ the White House’s own Director of National Intelligence warned about in April.”

It instead funds “radical priorities” such as restoring $123.5 million to the World Health Organization (WHO),  McCarthy said, adding that the WHO “has been complicit in covering up China’s COVID lies and contributed to a series of major missteps that bungled the global pandemic response.”

He also noted that the budget proposal would call for direct taxpayer-funded abortion, which “breaks with decades of settled precedent.”

“We need a vision that will provide our troops with the resources they need to keep our country safe, not one that fails to keep up with global threats, rewards the failures of the WHO, and violates Americans’ rights of conscience,” McCarthy said.

“This bloated $6 trillion proposal would take our nation to its highest levels of spending and debt since we fought World War II,” he said in a statement.

“Governing responsibly begins with budgeting responsibly, The White House should go back to the drawing board and work with Republicans on a budget that will create jobs and grow our economy,” he added.