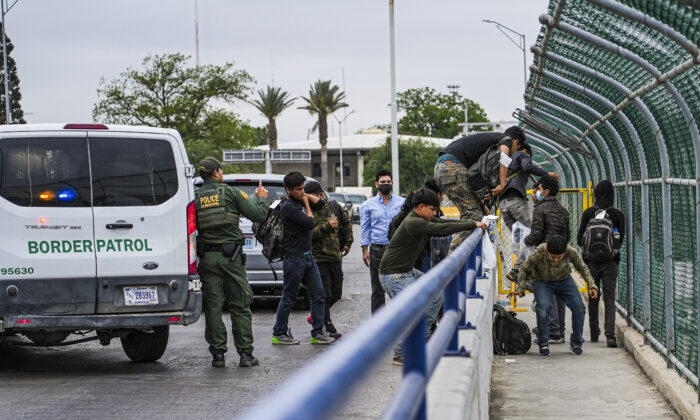 A Border Patrol agent drops a group of illegal immigrants being expelled under Title 42 at the halfway point of the international bridge between the United States and Mexico, in Eagle Pass, Texas, on April 19, 2022. (Charlotte Cuthbertson/The Epoch Times)
2022 Midterm Elections

Republicans could pick up as many as three seats in the House of Representatives in Texas as Hispanic voters are reeling from the effect that inflation has had on businesses, while the border crisis has made some Hispanics wonder whether the Democrats really are the party that cares about them, say experts.

In play are South Texas districts 15, which is a new district; the 28th district where an embattled Democratic incumbent is trying to stave off progressives and the GOP; and the 34th district where a sudden Democrat retirement opens the door for conservatives.

The general consultant for Texas’ Republican Gov. Greg Abbott, who is facing reelection this year, told the Epoch Times that the GOP is poised to win races all up and down the ballot in Texas, thanks, in part, to the appeal Republicans have with Hispanics voters, which Abbott has worked hard to win over.

The Abbott campaign, through their general consultant, said that they won about 45 percent of the Hispanic vote in the 2018 general election and figure they can go over the 50 percent mark this time.

“The resulting tsunami from the Biden open borders, his war on American energy jobs, the Democrats efforts to take guns away from law-abiding citizens and the dismal economy; food shortages, prices soaring, gas prices at historic highs … will result in additional congressional pick-ups and victories across the region,” David Carney, who is helping run the Abbott re-election campaign, told The Epoch Times.

What Are The Odds?

Vela took a job with a law firm, apparently being more willing to bill by the hour as a lawyer-lobbyist, than to face voters in a brutal reelection campaign.

Rene Coronado, a Democrat who is running to fill the vacancy, agrees that a few seats could flip in Texas, but denied it will be a red wave.

“You could see Hispanic voters who normally give Republicans 30 percent of their vote, go as high as 45 percent this time around, but I think Democrats will still get the majority of votes,” Coronado, who retired from the Army as a reservist, told The Epoch Times.

Texas, Coronado said, is already a GOP state, but could get a little “redder” this year.

“Republicans have a strong chance of converting the new 15th District [in Texas], which begins in counties southeast of Austin and stretches southward to the Mexican border,” Jim Ellis, who runs a Congressional handicapping service for private clients told the Epoch Times in an interview about the races.

Ellis noted that the 28th District, which has a runoff on May 24, could be in play if incumbent Democrat Rep. Henry Cuellar goes down to defeat, where he is being challenged by a progressive, former Cuellar intern, Jessica Cisneros.

In January, the FBI raided Cuellar’s offices, and while no charges have been filed yet, even prior to that, the nine-term Congressman was in trouble with progressive groups, said the Texas Tribune before the primary results made the run-off a necessity.

Nationally, Hispanic perceptions regarding inflation and Biden’s performance on the economy are on a steady decline.

High inflation, which has hit small business owners particularly hard, and which many voters blame on Democrats, especially President Joe Biden, is one factor that is influencing Hispanics to move towards the GOP.

And recent news isn’t doing Biden any favors. The Bureau of Labor Statistics reported on May 11 that consumer prices rose 8.3 percent in April, above analysts’ estimates of 8.1 percent, and again posting another 40-year high, after doing the same in March.

The National Federation of Independent Business said in April that small business confidence is at a 48 year low.

The April poll had even worse news with only 26 percent of Hispanics approving of the way Biden is doing his job as president, with 54 percent disapproving, said Quinnipiac.

“Nationally, Hispanic perceptions regarding inflation and Biden’s performance on the economy are as unfavorable as any demographic segment,” said Ellis.

Illegal Immigration Is Local This Time

It doesn’t help Democrats that those aforementioned three districts represent parts of the Rio Grande basin that abuts the Mexican border.

That means that illegal immigration went from being a national issue into being a local issue there, as illegal immigrants have flooded the border cities in the absence of a coherent Biden immigration policy, further boosting GOP chances.

Hispanics in the region aren’t newcomers either. Hispanic families have lived there even before there was a United States and just happen to identify with the Democrats, because, previously, they thought that the Democrats were the party that best looked after their interests.

That perception, however, is changing, according to some conservatives.

Rodriquez also blamed what he called “Bidenflation,” and “Democrat woke policies” that have done little to advance the cause of Hispanic families, especially in South Texas.

He said that people are struggling to fill up gas tanks and buy food even as they struggle with an influx of people surging across the border, and it’s especially hard on the Hispanic small business owners.

Biden Immigration Policies Gnaw At Quality Of Life And Government

And contrary to what Democrats have told them for years, Hispanics seem to actually care about enforcing laws against illegal immigration.

The Texas Hispanic Policy Foundation found recently that Hispanic voters support four of the five policies that Texas Gov. Abbott has imposed on the border to regain control of it.

“It’s become an issue of how to govern with this influx of people coming across the border. It’s straining the budgets of the cities and the charities without any direction from the Biden administration in Washington,” Coronado, the Democrat running in the 34th district, told The Epoch Times.

It’s a dangerous combination for politicians facing a population, like that of South Texas, who deals each day with the struggle to feed its own family, fill its own gas tank, and has been asked, and sometimes demanded, to do the same thing for others crowding across the border and forced into human trafficking, Wayne Hamilton, the director of Project Red Texas, a GOP group, told The Epoch Times

“Long-term governance by a single party, the Democrats, has led to corruption, inside dealing, and a feeling of invulnerability in the Rio Grande Basin by leftists politicos who have forgotten the core values of the community,” added Hamilton.

And all of it could combine into a very unhappy November in South Texas for the Democrats if the GOP is as triumphant as they say they’ll be.

The Epoch Times has reached out to the White House for a request for comment.