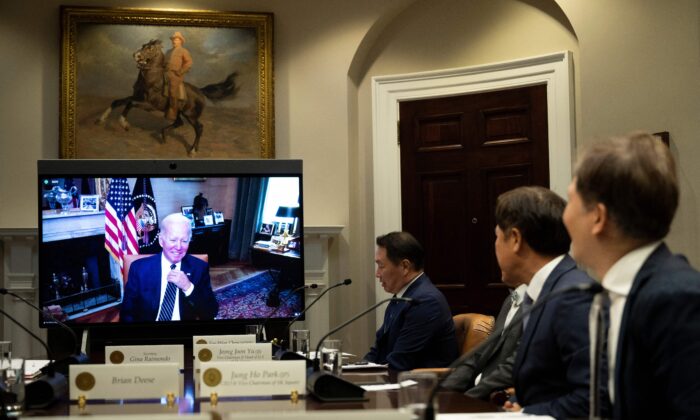 US President Joe Biden meets vitually with the Chairman and Principal Owner of SK Group Chey Tae-won in the Roosevelt Room of the White House in Washington on July 26, 2022. (Brendan Smialowski/AFP via Getty Images)
Executive Branch

Biden, 79, will remain isolated for now. He’s been staying in the White House’s residence since testing positive for COVID-19 on July 21.

Biden had received four doses of Pfizer’s COVID-19 vaccine before testing positive for the illness, which is caused by SARS-CoV-2, also known as the CCP (Chinese Communist Party) virus.

Because of his advanced age, the president is considered at high risk of progressing to severe disease, but his doctor said he expected Biden to “respond favorably” to Paxlovid.

According to O’Connor, the president’s symptoms had been improving since July 22.

Biden has continued working since contracting the CCP virus, receiving the President’s Daily Brief on weekdays and participating in meetings remotely.

Biden attended an economic briefing with Treasury Secretary Janet Yellen and other officials on Friday. He had no public events over the weekend. On Monday, Biden delivered remarks to the National Organization of Black Law Enforcement Executives Conference and met with various CEOs on the CHIPS Act, which Congress is poised to pass this week. And on Tuesday, Biden joined a meeting with SK Group Chairman Chey Tae-won.

He was scheduled to speak to the House Bipartisan Disabilities Caucus on Tuesday evening. Biden’s schedule for Wednesday has not yet been released.

“I’m feeling great,” Biden said during the meeting on Monday.

“I’m feeling better every day,” he said, adding later, “And I think I’m on my way to a full, total recovery, God willing.”

Biden’s illness has triggered fresh calls to rescind COVID-19 vaccine mandates, and the White House has acknowledged that vaccines no longer provide much protection against the disease.

“As we have said, almost everyone is going to get COVID,” Jean-Pierre told reporters in Washington.

But officials also allege that Biden’s experience shows the importance of getting vaccinated.

“His current health speaks to how Americans should avail themselves of boosters and treatments,” the press secretary said.