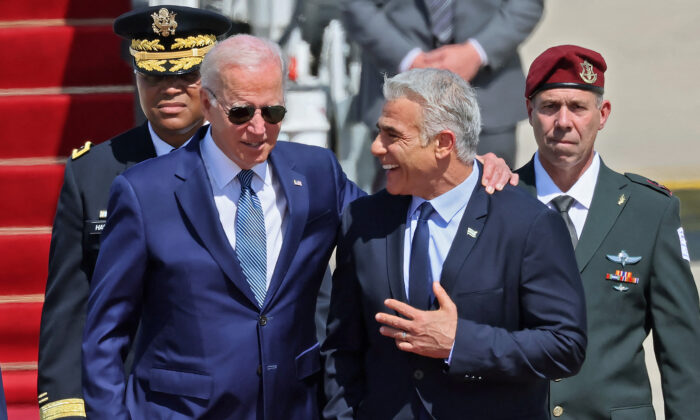 President Joe Biden has welcomed Saudi Arabia opening its airspace to all air carriers, including flights to and from Israel, marking an end to a ban on flights from the latter and a step toward normalizing relations between the two countries.

Biden is set to visit Saudi Arabia on Friday where he will meet with King Salman and Crown Prince Mohammed Bin Salman.

A statement from White House national security adviser Jake Sullivan on July 14 said that Biden “welcomes and commends the historic decision by the leadership of Saudi Arabia to open Saudi airspace to all civilian carriers without discrimination” which he said is the result of Biden’s “persistent and principled diplomacy with Saudi Arabia over many months.”

The president is expected to deliver further remarks on the move later on Friday after he embarks on a” historic flight directly from Israel to Jeddah, Saudi Arabia.”

Saudi Arabia announced late Thursday that it would open its airspace to “all carriers” ahead of Biden’s visit to the kingdom.

The Saudi General Authority of Civil Aviation (GACA) said in a statement that the country’s airspace is now open to all carriers that “meet the requirements for overflying” in line with the Chicago Convention of 1944, which stipulates that there should be no discrimination between civil aircraft used in international air navigation.

The decision will “complement the efforts aimed at consolidating the kingdom’s position as a global hub connecting three continents and to enhance international air connectivity,” GACA added in its statement.

It will also culminate in shorter flights from Asia to Israel, as airlines serving those flights had previously had to take longer routes that included a detour around Saudi Arabia while en route to Israel, adding up to three hours to the journey time.

Israel and Saudi Arabia have no diplomatic relations, and the Kindom does not recognize Israel as independent, despite its allies Bahrain and the United Arab Emirates doing so in 2020 as part of a broader diplomatic push by then-President Donald Trump’s administration to formalize relations between the countries.

A key issue at play is a resolution to the Israeli–Palestinian conflict and the creation, or rather lack of, a two-state solution.

GACA’s statement on Thursday stopped short of referring to Israel by name.

However, Saudi Arabia has allowed Israel–United Arab Emirates flights to cross its airspace since 2020, following Trump’s push to establish diplomatic relations, although Israel was restricted from using it for other commercial flights.

Air India flights are also allowed to fly over the Kingdom on journeys to and from Israel.

Both Saudi and Israel have also increasingly engaged in security cooperation against what they both see as a mutual threat in Iran.

Israeli Prime Minister Yair Lapid praised the move in a statement, which he said came after a “long road of intense and covert diplomacy with Saudi Arabia and the United States.”

Lapid also noted that “this is only the first step” and that his government will “continue working with [the] necessary caution, for the sake of Israel’s economy, security and the good of our citizens.”

During his visit to the Kingdom on Friday, Biden is widely expected to help elicit the help of Saudi Arabia and other Arab allies in getting OPEC to increase oil production as U.S. gas prices continue to soar.