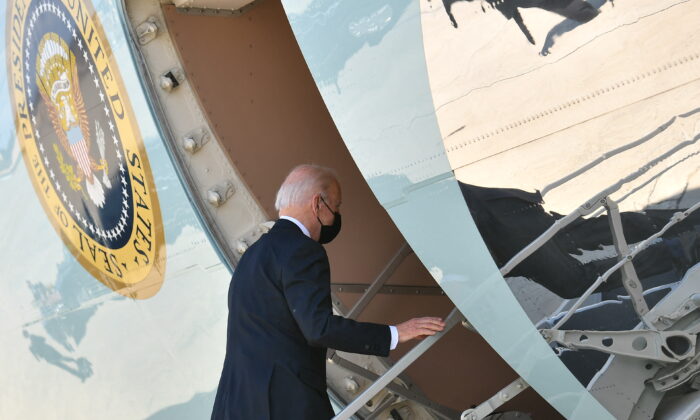 Biden Wears Mask on Plane After CDC Mandate Struck Down

President Joe Biden wore a mask on his plane ride to New Hampshire on April 19.

Photographs showed Biden wearing a black mask on the tarmac at the base and while boarding Air Force One at Joint Base Andrews in Maryland.

He was flying to New Hampshire to visit the New Hampshire Port Authority and deliver remarks on the infrastructure bill that he signed in late 2021.

After landing, Biden said it was “up to them” when asked if people should keep wearing masks on planes.

“During transit on today’s trip, masking will be required in line with CDC guidance,” the aide told news outlets.

The CDC had been requiring masks on planes, in airports, and on other mass transit such as trains, but a federal judge on Monday ruled the agency violated federal law in how it imposed the mandate, and does not have the authority to require masks.

“The mandate exceeded the CDC’s statutory authority, improperly invoked the good cause exception to notice and comment rulemaking, and failed to adequately explain its decisions. Because ‘our system does not permit agencies to act unlawfully even in pursuit of desirable ends,’ the court declares unlawful and vacates the mask mandate,” U.S. District Judge Kathryn Kimball Mizelle, a Trump appointee, said in her decision.

An administration official later told outlets that the ruling means the mask mandate “is not in effect at this time.”

The Transportation Security Administration added separately that it will “no longer enforce” its directive, based on the CDC order, of requiring masks.

The CDC still recommends wearing masks when a person is traveling on public transportation but can no longer require mask-wearing.

The administration has not yet said whether it will appeal Mizelle’s ruling.

White House press secretary Jen Psaki called it “a disappointing decision” during a briefing on Monday.

“What we announced last week was just a two-week extension in order to have time to assess what we’ve all seen is rising cases, and make an assessment and recommendation with that in mind,” she said. “So, of course, it’s disappointing.”

Leslie Manookian, president and founder of the Health Freedom Defense Fund and one of the plaintiffs, told The Epoch Times that the mandate was “a clear violation of federal law.”

“They don’t have the authority to do what they did in mandating a mask mandate, and one of the reasons for that is because these police powers include health powers, and those are reserved to the states to make decisions over, not to the federal government,” she added.