Biden Warned Another Attack in Kabul ‘Highly Likely’ and Imminent 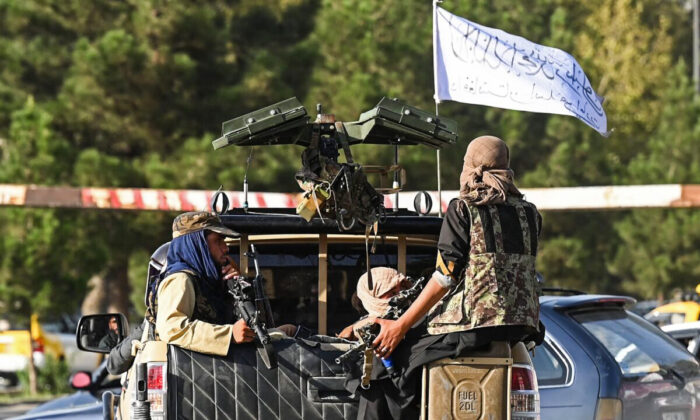 Taliban fighters in a vehicle patrol a street in Kabul on August 27, 2021, as last-ditch evacuation flights took off from Kabul airport on August 27, a day after twin suicide bombings on crowds trying to flee Taliban-controlled Afghanistan killed at least 85 people, including 13 US servicemen. (Photo by Aamir QURESHI / AFP) (Photo by AAMIR QURESHI/AFP via Getty Images)
By Allen Zhong

President Joe Biden has been warned by commanders that another terrorist attack is “highly likely” to happen in the next 24 to 36 hours.

“The situation on the ground continues to be extremely dangerous, and the threat of terrorist attacks on the airport remains high. Our commanders informed me that an attack is highly likely in the next 24-36 hours,” the president said in a statement the White House issued Saturday afternoon.

Biden said he directed the commanders to take every possible measure to protect the military personnel on the ground at Kabul airport.

He made the statement after meeting the national security team in Washington and the commanders in the fields on Saturday morning.

The commanders’ warning messages came as the country is mourning the 13 service members killed during a terrorist suicide bombing in Kabul.

One bomb went off near the Abbey Gate of U.S.-held Hamid Karzai International Airport in Kabul, Afghanistan, late on Aug. 26 local time. Pentagon officials said that 11 Marines, one Navy corpsman, and one U.S. Army soldier were killed by the suicide bombing. At least another 18 service members were wounded.

The deaths mark the first U.S. military combat-related deaths in Afghanistan since February 2020.

The terrorist group ISIS claimed responsibility for the attack, bragging about a suicide bomber “managing to penetrate all the security fortifications” put into place by U.S. forces and the Taliban.

Biden vowed to hunt down the persons who planned and carried out the Aug. 26 attack against U.S. personnel and make the terrorists pay.

“I think he made clear yesterday that he does not want them to live on the Earth anymore,” White House Press Secretary Jen Psaki said when she was asked to elaborate on Biden’s statement.