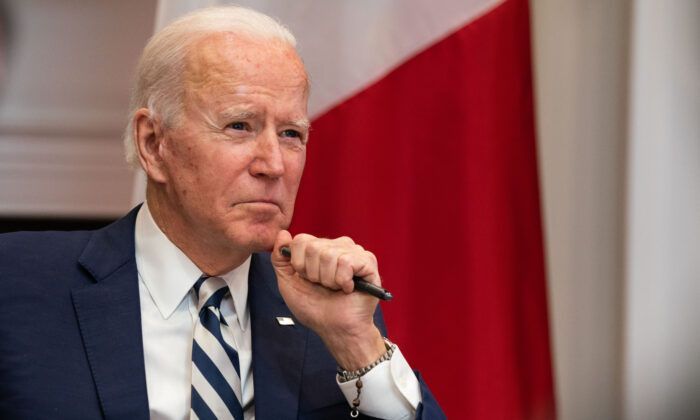 Big Meat, Big Oil, and Big Business are conspiring against consumers and raising prices for food and energy.

This is the message President Joe Biden, his administration, and prominent Democrats are sending to the American people as they attempt to scapegoat the private sector for price inflation surging to its highest level since June 1982.

Food prices are up more than 6 percent. Beef and veal have increased 18.6 percent, chicken has advanced 10.4 percent, and eggs by the dozen have risen 11.1 percent.

A whole host of issues have contributed to this inflationary environment at the supermarket: a labor shortage, surging energy prices, the worldwide supply chain crisis, backlogs, and strengthening consumer demand.

The White House thinks there’s something else going on. The administration insists that pork and ham prices skyrocketing 15.1 percent and 10.1 percent, respectively, is because four companies control most of the beef, pork, and poultry markets.

The solution? The president wants to expand the supply chain by subsidizing smaller businesses. He will be moving ahead with a deficit-financed $1 billion that includes supporting independent food processors that will likely need further taxpayer-funded support in the future since they cannot emulate the efficiency and cost savings of their larger counterparts.

Energy prices have been on a tear to start 2022. U.S. crude oil futures have climbed 15 percent year-to-date, while natural gas has jumped 14 percent.

Motorists are paying $3.31 for a gallon of gasoline, up from $2.39 last year. In some parts of the United States, such as California, consumers are paying about $4.65 per gallon.

Like food inflation, energy prices trading at their highest levels since 2014 is due to a combination of factors: increasing demand, tepid output, falling inventories, and geopolitical tensions.

Despite these sky-high prices, American oil and gas firms have also been apprehensive about ramping up production due to regulatory uncertainty and Biden’s green agenda.

Rather than encouraging U.S. oil and gas firms to “drill, baby, drill,” Biden and his team pleaded with the Organization of the Petroleum Exporting Countries and its allies, OPEC+, to turn on the taps. What’s more, the administration is homing in on possible collusion between gasoline stations and energy giants, something industry experts have dismissed.

Employers are struggling to fill positions, as there are about 10.5 million job openings.

This past summer, the president urged companies, from fast food to retailers, to “pay them more.” At the same time, the U.S. government was sweetening pandemic-era jobless benefits by $300 a week. These unemployment payments mirrored the paychecks for many people, dissuading them from returning to the workforce until absolutely necessary.

Companies have ostensibly taken the president’s advice. Over the last year, average hourly earnings have advanced 4.7 percent to $31.31.

There are now two problems happening: Businesses are still finding it challenging to find workers, and real wage growth has been eviscerated by a soaring consumer price index.

All these developments have led to a sour note for Biden: Many Americans are no longer confident in the administration. In addition to his approval rating hovering around 41 percent, consumer and business surveys don’t portray the president in a positive light.

The University of Michigan’s Consumer Sentiment Index for January eased to 68.8, down from 70.6 in December. One- and five-year inflation expectations rose to 4.9 percent and 3.1 percent, respectively.

The Federal Reserve Bank of New York’s December Survey of Consumer Expectations report revealed one-quarter of respondents anticipated that their household financial situation would deteriorate by next year as they think inflation will be around 6 percent.

Should these tough economic challenges persist, the Biden administration might continue scapegoating everyone else rather than take responsibility for present conditions.

When pump prices fell by a nickel in December, Biden cheered the news by crediting his efforts to increase supply after tapping the Strategic Petroleum Reserves. But now that this relief has essentially vanished, he has rejected any culpability.

This is perhaps the core of Bidenomics: Blame everyone else when things aren’t going well and take credit when the economy improves.