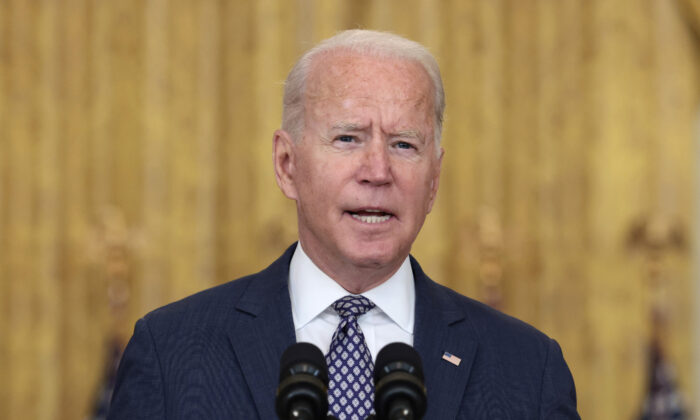 President Joe Biden delivers remarks on the U.S. military’s ongoing evacuation efforts in Afghanistan from the East Room of the White House in Washington on Aug. 20, 2021. (Anna Moneymaker/Getty Images)
By Zachary Stieber

The United States still does not know how many Americans are in Afghanistan, President Joe Biden told reporters on Friday, but will evacuate every U.S. citizen who wants to leave the country.

Biden said officials are still working on verifying the figure.

“We want to get a strong number as to exactly how many American citizens are there and where they are,” he said.

The United States withdrew most personnel from the country by Aug. 14, but thousands of troops rushed back after the Taliban fought off Afghan forces and took over the country. The United States holds Kabul’s airport with about 6,000 soldiers, but little else, and the military has opted not to rescue stranded people, forcing Americans and Afghans who seek special visas to get through Taliban terrorists to reach U.S.-held ground.

Despite some Americans telling news outlets that they have tried reaching the airport and have been stopped by Taliban fighters, and the U.S. Embassy emphasizing that the government can’t ensure safe passage, Biden and his administration continue to claim they don’t know of people being unable to make it there.

“Now, that’s a different question when they get in the rush and crowd of all the folks just outside the wall, near the airport,” he added. “That’s why yesterday or the day before we went over the wall and brought in 169 Americans.”

The Taliban told Reuters that the group is only stopping people “who have no legal papers to travel.”

U.S. officials have said they’re in regular contact with the Taliban on the situation outside the airport.

An Aug. 31 deadline is looming, and the administration has not committed to pushing that back if the evacuation is not complete by then.

The Taliban has warned America to fully withdraw by Sept. 11 or face consequences.

“I cannot promise what the final outcome will be but what it will be, that it will be without risk or loss, but as commander in chief I can assure you that I will mobilize every resource necessary,” Biden said.

Just yesterday, 5,700 people were flown out, as the rate of the evacuation increases.

But an hourslong pause on Friday could threaten the progress. That pause happened because U.S. officials wanted to make sure they could process evacuees, Biden said.

The president took questions for the first time since last week. He is planning to stay in Washington on Friday night before traveling to his home in Wilmington, Delaware on Saturday.