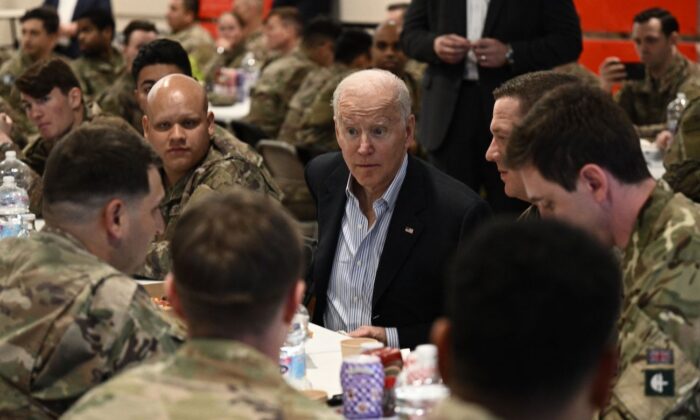 President Joe Biden meets service members from the 82nd Airborne Division, who are contributing alongside Polish Allies to deterrence on the Alliances Eastern Flank, in the city of Rzeszow in southeastern Poland, on March 25, 2022. (Brendan Smialowski/AFP via Getty Images)
Russia-Ukraine War

President Joe Biden visited Poland on Friday in an expression of support for the NATO member nation amid the Russia–Ukraine war, and to thank Poles for having welcomed Ukrainian refugees who fled after Russia’s invasion.

More than 3.5 million Ukrainians have fled the country since the Feb. 24 invasion, of which over 2.2 million have entered Poland, according to the United Nations.

The Democrat president made a surprise visit to the Polish town of Rzeszów, about 60 miles (96.5 km) or an hour’s drive from the Ukrainian border. There, he met with several service members of the U.S. Army’s 82nd Airborne Division at a barber shop, and later met more of the division’s soldiers at a dining facility, where he ate some pizza with the soldiers for lunch.

The elite division specializes in parachute assault operations. Almost 5,000 soldiers from the division have been in Poland since Feb. 6, and were deployed at the time amid fears of a Russian invasion.

They are now assisting with the humanitarian emergency there while continuing to bolster the U.S. military presence on NATO’s eastern flank, serving alongside thousands of other NATO troops, including from Poland, Bulgaria, Estonia, Latvia, Lithuania, and Romania.

Biden praised the soldiers, saying, “You are the finest fighting force in the world and that’s not hyperbole.”

He later addressed the soldiers in more formal remarks, telling them the nation “owes you big.”

Later in the afternoon, Biden met with Polish President Andrzej Duda and the two received briefing from Samantha Power, the director of the United States Agency for International Development (USAID) and other NGOs about the situation of Ukrainian refugees in Poland, and what will be needed to mitigate the crisis. The leaders were also updated on the humanitarian response to help people sheltering from attacks inside Ukraine.

Duda had planned to welcome Biden earlier on Friday at the Rzeszów-Jasionka airport, but his plane turned back en route to Rzeszów and made an emergency landing in Warsaw. Duda later boarded a different aircraft and headed back to the airport.

Biden said he had hoped to get even closer to the border but was prevented because of security concerns.

“I’m here in Poland to see first hand the humanitarian crisis,” he said at the start of a meeting with NGOs, U.S. and Polish officials and Duda. “Quite frankly part of my disappointment is I can’t see it first hand like I have in other places. They won’t let me, understandably, I guess, cross the border and take a look at what’s going on in Ukraine.”

Duda, through an interpreter, thanked Biden for his support. He said the Poles see the Ukrainians they are receiving as their “guests.”

“This is the name we want to apply to them,” Duda said. “We do not want to call them ‘refugees.’ They are our guests, our brothers, our neighbors from Ukraine, who today are in a very difficult situation.”

On Friday evening, Biden landed in the capital Warsaw. He is scheduled to have further talks with Duda on Saturday, meet with other Polish leaders including the Polish prime minister and the mayor of Warsaw, and also deliver what the White House described as a major address.

Poland hopes that Biden’s two-day visit to the country will underline the security assurances already made by the United States that it will defend “every inch” of NATO territory.