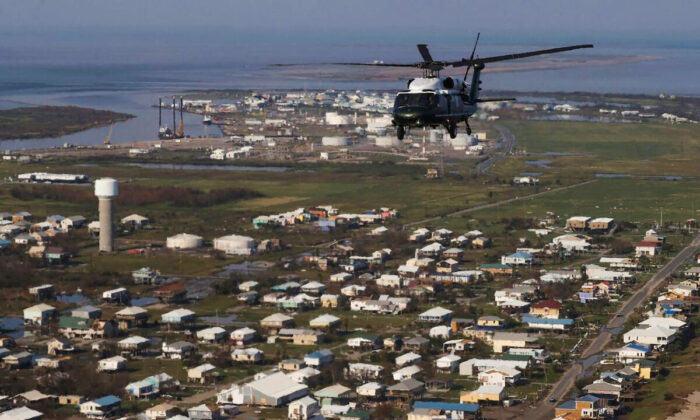 President Joe Biden, onboard Marine One, inspects the damage from Hurricane Ida on an aerial tour of communities in Laffite, Grand Isle, Port Fourchon and Lafourche Parish, Louisiana, on Sept. 3, 2021. (Jonathan Ernst/POOL/AFP via Getty Images)
US News

President Joe Biden has visited Louisiana in the aftermath of Hurricane Ida and promised federal aid to recovery efforts in affected communities.

Hurricane Ida made landfall on Aug. 29 near Louisiana’s Port Fourchon and headed northward, eventually sweeping through the U.S. East Coast with heavy rain and flash flooding in parts of states including Maryland, Pennsylvania, New York, and New Jersey, on Wednesday.

Ida is the fifth most powerful hurricane to strike the United States, with maximum winds of 150 mph (240 kph) when it made landfall.

Biden landed in New Orleans in Air Force One and inspected the devastation from Hurricane Ida’s aftermath in Reserve and LaPlace.

In Louisiana, power transmission lines were toppled and Gulf oil operations were taken offline. About 823,000 homes and businesses remain without power in the state on Friday, after electric utility Entergy Corp said it had restored service to about 225,000 customers.

Speaking at a residential neighborhood in LaPlace, a small community about 30 miles (50 km) west of New Orleans, Biden expressed empathy at the frustration about how long it was taking to restore power, noting that the effort is dangerous work with two men having already lost their lives in the process.

He said the administration was working with energy companies and will deploy more federal resources, including hundreds of generators, to restore power as soon as possible.

Biden urged private insurance companies to not “hide behind the fine print” and step up to cover temporary housing costs and help their customers. LaPlace, along with other communities in the Bayou state, was hit by flooding and other storm damage.

The federal government with the help of the state’s governor has provided $100 million in critical assistance directly to people in Louisiana by providing $500 to applicants who were displaced from their homes due to the disaster declaration, Biden said.

He added that, at the governor’s request, FEMA will help with providing a place for people to stay and be secure—referring to measures such as coverage for people’s hotel bills if they couldn’t stay at home during the hurricane.

Edwards said Biden has “been a tremendous partner,” adding that he intended to keep asking for help until the president said no. The governor said he would present Biden with a long list of needs including fuel shipments as most of the area’s refining capacity was knocked offline and mile-long lines have formed at gas stations and emergency supply distribution centers.

The governor said that the state was grateful for past federal investment in the levee system around New Orleans, saying that amid the hurricane, “there wasn’t a levee anywhere in Louisiana, state or federal, that failed.”

“We had a few of the minor levees that overtopped—and if your home got water because of that, it’s not minor; it’s serious—but we’re talking about very low numbers compared to what would have happened,” Edwards said. “So investing in infrastructure, in resiliency, and making sure that we do things better and smarter, it does pay off, because this would be a much more expensive storm to recover from had we not already made those investments.”

Cassidy said that he and the president discussed infrastructure. In a post on Twitter, Cassidy said, “We agreed putting power lines beneath the ground would have avoided all of this. The infrastructure bill has billions for grid resiliency.”

Meanwhile, Democrats seek to push through a $3.5 trillion spending plan that calls for significant investments in areas such as home health care, child care, education, and a number of areas Republicans do not agree with, including climate-related measures and amnesty for illegal immigrants.