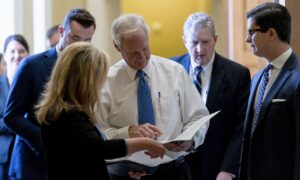 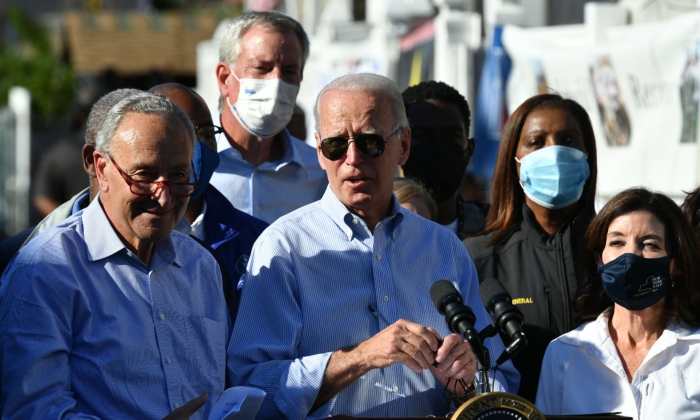 President Joe Biden traveled to parts of the northeast Tuesday to view the aftermath of flash flooding that left at least 50 people dead in six states.

Biden made stops in Manville, New Jersey and the New York City borough of Queens, where record rainfall last week caused by the remnants of Hurricane Ida overwhelmed rivers and sewer systems leaving some trapped in flooding basements or swept away by fast-moving waters that crashed through the streets. The storm also produced multiple tornadoes.

Biden used the weather event as a backdrop to push his $1 trillion infrastructure plan to modernize roads, bridges, sewers and other infrastructure to better withstand extreme weather. The measure is still being considered in Congress. The White House has also asked Congress for an additional $24 billion to cover the costs of Hurricane Ida and other natural disasters.

Biden called the situation “code red,” claiming that climate change was the cause for the storms and a reason to enact his infrastructure plan.

“Climate change poses an existential threat to our lives, to our economy,” said Biden in an address given in an alley in Queens surrounded by New York officials and Senate Majority Leader Chuck Schumer (D). “The threat is here. It’s not going to get any better. The question is can it get worse. We can stop it from getting worse.”

Biden said climate change is an international problem and needed a global response saying, “We’ve got to move the rest of the world. Not just America.”

The route the president’s motorcade took through New Jersey earlier in the day provided evidence of the flood damage, with piles of garbage bags and sodden furniture heaped along the curbs.

The streets were also lined with residents holding cell phones above their heads. Among them were large clumps of Trump supporters waving signs and shouting.

“You really took a hit,” Biden said while meeting with New Jersey Gov. Phil Murphy (D) and other state officials at the Somerset County Emergency Management Training Center. “The losses we witnessed were profound.”

Manville is located along New Jersey’s Raritan River and is regularly hard-hit by major storms. The borough experienced flooding in 1998 in the remnants of Tropical Storm Floyd, in 2011 during the aftermath of Hurricane Irene and in 2012 from Superstorm Sandy.

Of the total deaths from the aftermath of Ida, 27 were recorded in New Jersey and 13 in New York City, including 11 in Queens.
In a statement, New York Gov. Kathy Hochul (D) said the storm caused about $50 million in damage to infrastructure and public property. Jersey City Mayor Steven Fulop wrote on Twitter damage to city infrastructure was estimated at $35 million.

Biden approved federal disaster funding for the two states in statements released over the weekend. The disaster declarations make federal funds available to the New York counties of Bronx, Kings, Queens, Richmond, and Westchester, and the New Jersey counties of Bergen, Gloucester, Hunterdon, Middlesex, Passaic, and Somerset. He is open to applying the declaration to other storm-ravaged New Jersey counties, White House spokesperson Jen Psaki said.

Federal Emergency Management Agency (FEMA) Administrator Deanne Criswell told New Jersey officials in her address that while damage assessments continue, more than 7,000 families had already applied for aid and that number is expected to rise.

Individuals affected by the storm can seek assistance at DisasterAssistance.gov, or they can call 1-800-621-FEMA.

Biden visited New Orleans last week where Ida first made landfall as a Category 4 storm. It claimed at least 13 lives in that state and power is still being restored to customers in the region.

Hurricane Henry is currently churning over the Atlantic Ocean increasing the risk of rip currents along the East Coast this week. A Tropical Storm Watch has been issued for Bermuda.