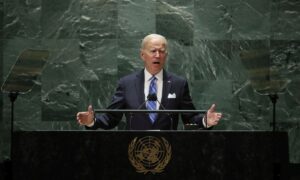 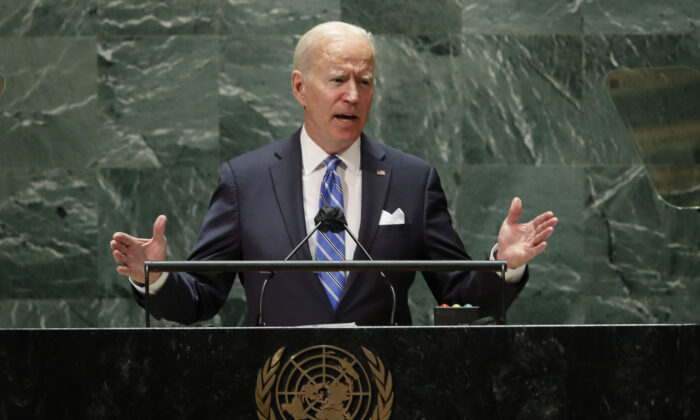 President Joe Biden called for deep global engagement and a shared future in his first address since taking office before the United Nations Tuesday at the UN’s 76th General Assembly at its headquarters in New York City.

Biden told the room full of leaders the world is at an “inflection point in history” and nations must “work together like never before.” He called this a “decisive” decade for our world that will “quite literally determine our futures.”

“We will choose to build a better future—we, you and I,” said Biden near the close of his roughly 30-minute address. “We have the will and capacity to make it better, but ladies and gentlemen we can’t afford to waste any more time.”

In the evening prior to the speech, Biden had met for the first time in a one-on-one sit-down with U.N. Secretary-General António Guterres who, in an interview with AP on Saturday, urged the United States and China to fix their “completely dysfunctional” relationship.

“We need to avoid at all cost a Cold War that would be different from the past one, and probably more dangerous and more difficult to manage,” said Guterres.

In his speech, Biden did not name the Chinese regime directly, but said “the United States will compete and compete vigorously,” later adding, “but we are not seeking, say it again, not seeking a new Cold War, or a world divided into rigid blocks.”

The speech came days after Beijing responded to a newly announced trilateral defense agreement between the United States, United Kingdom, and Australia by accusing the United States of aggravating an arms race and perpetuating an “outdated Cold War mentality.” Chinese officials also accused Australia of being a “running dog” of the United States and that it should “prepare for the worst.”

While the Biden administration insists the new defense pact, called AUKUS, is “not aimed or about any one country,” many view it as a response to increasingly assertive actions taken by Chinese vessels in the South China Sea and the major expansion of China’s nuclear missile silo fields.

“The United States is ready to work with any nation that steps up and pursues peaceful resolution to shared challenges, even if we have intense disagreements in other areas,” said Biden in his speech. “Because we will all suffer the consequences of our failure if we do not come together to address the urgent threats like COVID-19, climate change, or enduring threats like nuclear proliferation.”

Biden called for nations to bring their “highest ambitions to the table” ahead of the U.N. Climate Change Conference (COP26) planned at Glasgow, Scotland, in November and reiterated a pledge he made in April to reduce U.S. greenhouse gas emissions by 50 to 52 percent below 2005 levels by 2030.

Biden’s domestic climate agenda has been working its way through Congress in the form of a $1 trillion infrastructure plan and a $3.5 trillion budget-reconciliation plan. In the speech, he said those measures, along with the support of private investment, will include $100 billion meant to take climate-related action in developing nations.

On the CCP virus, Biden mourned the more than 4.5 million reported dead from the virus worldwide and urged the global community to take steps to prepare for future pandemics through the creation of both a new funding mechanism for global health security and a new global health threat council. He also noted the more than $15 billion the United States has spent on its global COVID-19 response and the more than 160 million doses of vaccine it has sent to 100 other countries.

“A dose of hope directly from the American people,” said Biden. “And, importantly, no strings attached.”

Biden says he will announce more virus-related commitments from the United States at a virtual Global COVID-19 Summit planned for Wednesday. For that meeting, the White House states the goal of producing and distributing billions of doses of vaccine to inoculate the world against the virus.

Demonstrations against COVID-19 vaccine mandates have been held in countries around the world, including recent protests that have led to violent exchanges with police officers in Melbourne, Australia.

Biden’s speech also focused on global terrorism, noting the recent withdrawal of the U.S. military from Afghanistan after 20 years of occupation, and the suicide bombing attack last month that claimed the lives of 13 U.S. service members and over 160 Afghan civilians during the evacuation of American citizens and allies at the Kabul airport.

Biden said U.S. military power should be the “tool of last resort” but added those who “continue to commit acts of terrorism against us will continue to find a determined enemy in the United States.” He says the United States is now better equipped to combat terrorism than it was during the 9/11 attacks.

“We know how to build effective partnerships to dismantle terrorist networks by targeting their finances and support systems, countering their propaganda, preventing their travel as well as disrupting imminent attacks,” he said.

The Pentagon admitted Friday an Aug. 29 drone strike launched in response to the Kabul attacks was a “tragic mistake” that killed no terrorists, but left 10 civilians, including as many as seven children, dead.

Biden assured world leaders the United States is back at the table in international forums, citing NATO, the European Union, the Quad, ASEAN, African Union, and the Paris Climate Agreement.