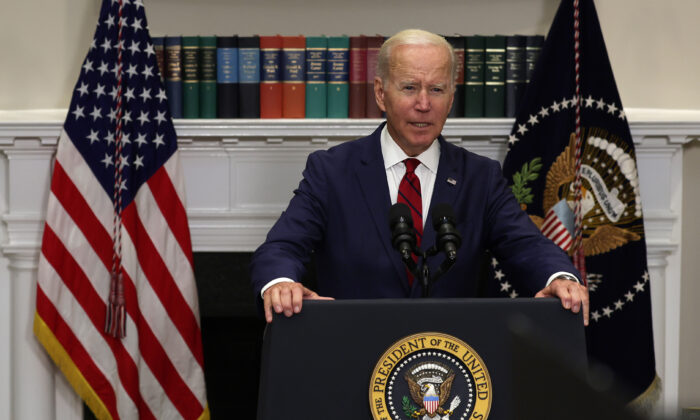 Biden: US Working With Mexico to ‘Stop the Flow’ of Illegal Immigrants

“We’re working with Mexico and other countries to stop the flow,” Biden said after an unrelated speech in Washington.

He was responding to a question about the jump in illegal border crossings during his first term in office.

More than two million arrests have already been made at the U.S.–Mexico border in fiscal year 2022, the most in U.S. history. Biden’s administration already set the records for the most apprehensions in a fiscal year and a calendar year.

Administration officials have been keen to point to an increase in immigrants from Venezuela, Nicaragua, and Cuba crossing the border, and Biden took up the narrative.

“There are fewer immigrants coming from Central America and from Mexico. This is a totally different circumstance. What’s on my watch now is Venezuela, Cuba, and Nicaragua. And the ability to send them back to those states is not rational,” he said, before saying his administration was working with Mexico. “But that’s the difference.”

According to Customs and Border Protection (CBP) statistics, of the 157,291 “unique” illegal immigrants taken into custody in August, 35 percent were from Veneuzela, Cuba, or Nicaragua. That was a 175 percent increase from August 2021.

Unique illegal immigrants are those who have not been arrested at the border in the past 12 months.

Numerically, more immigrants from Mexico and northern Central America were captured, or 56,979 to 55,333. That group made up 36 percent of the unique encounters, but the number was down 43 percent from August 2021.

“Failing communist regimes in Venezuela, Nicaragua, and Cuba are driving a new wave of migration across the Western Hemisphere, including the recent increase in encounters at the southwest U.S. border,” Chris Magnus, the commissioner of CBP, said in a statement.

White House press secretary Karine Jean-Pierre told reporters in Washington that administration officials are “doing what we can to work with our regional partners to address this new challenge and process individuals in a safe, orderly, and humane way.”

Mark Krikorian, executive director of the Center for Immigration Studies, said the Biden administration is not applying the Title 42 authority, which enables quick expulsion of illegal immigrants, to natives of Venezuela, Nicaragua, and Cuba. CBP declined to answer questions about the exemptions, to which Biden alluded.

On the Senate floor, Senate Minority Whip John Thune (R-S.D.) said that the sharp rise in illegal immigration has “resulted in scenes of near chaos at the southern border” and called on the Biden administration to halt what he described as “de facto open border policies.”

Thune noted that one immigrant told an outlet that “we come in free, no problem.”

“That is the message that President Biden’s immigration policies have conveyed, and the longer he continues with his de facto open border policies,” Thune said, “the more individuals are going to be encouraged to attempt the dangerous journey across our southern border.”