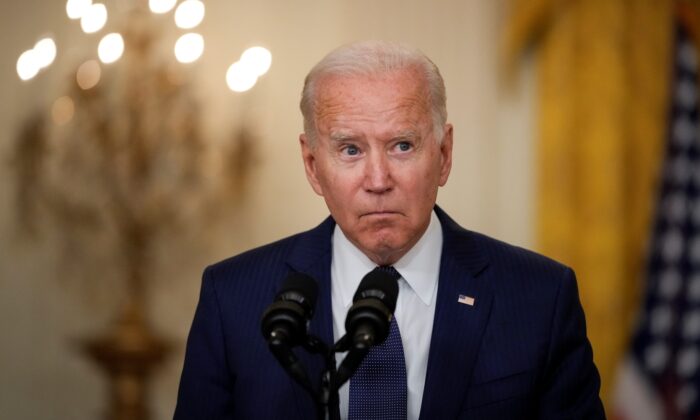 U.S. President Joe Biden speaks about the situation in Afghanistan in the East Room of the White House in Washington on Aug. 26, 2021. (Drew Angerer/Getty Images)
US News

Biden: US ‘May Have’ Shared List of Names With Taliban

President Joe Biden on Thursday didn’t deny reports that the administration handed the Taliban a list of names of American citizens, green card holders and Afghan allied personnel in an attempt grant them entry to Kabul’s international airport, saying that it “may have” happened.

The president added that to the best of his knowledge, the “bulk” of the groups have been “let through,” adding that he can’t say with “certitude” that there was a list of names passed to the Taliban terrorist group, which seized control of Afghanistan on Aug. 15.

He backtracked moments later, saying that “it could very well have happened.”

The president was responding to a report by Politico, published on Thursday, which cited anonymous U.S. and congressional officials. The unnamed sources claim the move was designed to expedite the evacuation of tens of thousands of people from Afghanistan, following the Taliban’s takeover.

The allegations in the report were met with intense criticism, with some referring to the alleged list as a “kill list” as described by a defense official in the Politico report.

“Absolutely reckless and horrific,” Sen. Marsha Blackburn (R-Tenn.) wrote on Twitter. “The Biden Administration gave the Taliban a kill list while lying to us, saying they didn’t have details on every name and whereabouts. Every single person involved must resign or be impeached.”

The news comes amid reports that the terrorist group has been going door-to-door searching for Afghan “collaborators.” According to a United Nations threat assessment report, obtained by the BBC, the Taliban has been conducting “targeted door-to-door visits” of people who worked with U.S. and NATO forces.

“There are a high number of individuals that are currently being targeted by the Taliban and the threat is crystal clear,” Christian Nellemann, who heads the Norwegian Center for Global Analyses, the group behind the report, told the BBC.

He added, “It is in writing that, unless they give themselves in, the Taliban will arrest and prosecute, interrogate and punish family members on behalf of those individuals.”

Nelleman warned of mass executions, emphasizing that anyone on the Taliban’s blacklist was in severe danger.

Separately on Thursday, Marine Corps Gen. Kenneth F. McKenzie Jr., commander of U.S. Central Command, said during a press briefing that the U.S. military had been sharing “information with the Taliban” to help prevent attacks.

“We share versions of this information with the Taliban, so that they can actually do some searching out there for us. And we believe that some attacks have been thwarted by them,” he said. “We cut down the information we give the Taliban, they don’t get the full range of information that we have, but we give them enough to act time and space to try and prevent these attacks.”

He made the remarks in response to the attack by suicide bombers earlier in the day that killed 13 U.S. troops and wounded more than a dozen others. ISIS claimed responsibility for the attack.

McKenzie told reporters he expected such attacks to continue and that U.S. forces are is doing everything possible to prepare for those attacks.

“That includes reaching out to the Taliban, who are actually providing the outer security around the airfield to make sure they know what we expect them to do to protect us, and we will continue to coordinate with them going forward,” he said.