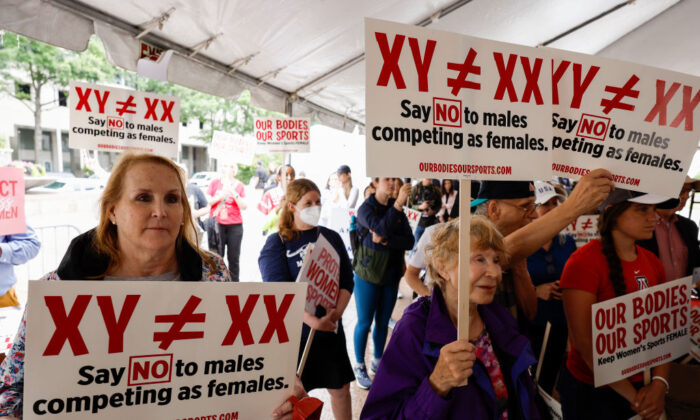 Demonstrators listen during an "Our Bodies, Our Sports" rally for the 50th anniversary of Title IX at Freedom Plaza in Washington, on June 23, 2022. (Anna Moneymaker/Getty Images)
US

A Biden administration proposal to expand the definition of sex discrimination in education “jeopardizes free speech throughout America’s schools, and it is constitutionally flawed when applied in any educational setting to daily conversations,” according to the Alliance Defending Freedom (ADF).

The Arizona-based public interest law firm, which specializes in First Amendment freedom of speech and religious expression and practice, made the comment in a comprehensive critique of the Department of Education’s proposed revision to Title IX, part of the Education Amendments Act of 1972 enacted to protect women’s equal access to opportunities in learning and athletics in public schools.

The proposal, first published in the Federal Register on July 12, covers “the obligation of all schools, including elementary schools, secondary schools, post-secondary institutions, and other recipients that receive federal financial assistance.”

Federal funding just for K–12 totals more than $60 billion annually. The Education Department’s 2022 total budget was $189 billion, but post-secondary education federal funding resources also include agencies such as the National Science Foundation and the National Institutes of Health.

In the proposal, the government claims that “research suggests that school policies that permit students to participate consistent with their gender identity may be associated with better mental health.”

But the proposed revision, according to ADF, will actually “lead to improper restrictions on protected speech.”

“Just seven years ago, the Supreme Court emphasized the ‘good faith’ in which ‘reasonable and sincere people here and throughout the world’ have held that marriage is a permanent, monogamous, heterosexual union,” ADF stated.

“Despite that assurance, governments now treat the refusal to express messages in support of same-sex marriage as an act of discrimination on the basis of sexual orientation, and at least one school has issued several no-contact orders under Title IX because of students’ religious expression in support of traditional marriage.

“Opinions on marriage, sexual morality, and human identity raised by the issue of sexual orientation are the sort of ‘things that touch the heart of the existing order’ over which the Constitution guarantees ‘the right to differ,’ especially in American schools. The department should not depart from the statutory text by redefining ‘sex’ to include ‘sexual orientation.’”

The Biden administration’s proposal to expand the definition of sex discrimination in education comes as the nation’s schools and workplaces are increasingly riven by demands from transgender activists and their political allies in government that all citizens be required to use “preferred pronouns” that reflect an individual’s chosen sexual identity rather than his or her biological reality.

The proposal will intensify such demands, according to ADF, with a result that “the inclusion of ‘gender identity’ in the meaning of ‘sex’ will lead to improper restrictions on speech and improper compulsion of speech.”

“Students who identify as transgender commonly request to be addressed by different names and pronouns,” ADF said.

“The use of pronouns inconsistent with a person’s sex communicates a message: that what makes a person a man or a woman is solely that person’s sense of being a man or a woman. Students who take a contrary view of the relationship between biological sex and personal identity (for religious, philosophical, scientific, or other reasons) may be reluctant to use those terms because using them contradicts their own deeply held views.”

Even before the adoption of the proposed amendment, ADF stated, the federal government “already [interpreted] refusal to use pronouns as the sort of activity it will investigate and punish.”

“Schools around the country are also punishing students and faculty for refusal to use names or pronouns inconsistent with a student’s biological sex, often invoking Title IX as their basis for doing so,” it said.

Teachers in public primary and secondary schools have been punished for declining to address students with their preferred pronouns, even though their objection is based on their religious faith and their refusal to lie to parents about how their children are being addressed in the classroom, according to ADF.

Similar controversies are occurring on college and university campuses where professors face discrimination for the same reasons, including a case in which ADF successfully defended the academic’s First Amendment rights.

“The United States Court of Appeals for the Sixth Circuit recently held that such compulsion, as applied to a university professor, violates the First Amendment. Shawnee State University officials punished a philosophy professor, Dr. Nicholas Meriwether, because he declined a male student’s demand to be referred to as a woman with feminine titles and pronouns (‘Miss,’ ‘she,’ etc.),” ADF noted in its comments to the Education Department.

“Dr. Meriwether offered to use the student’s preferred first or last name instead. Initially, the university accepted that compromise, only to reverse course days later. Ultimately, it punished him by putting a written warning in his personnel file and threatened ‘further corrective actions’ unless he spoke contrary to his own philosophical and Christian convictions.”

In upholding Meriwether, the U.S. Court of Appeals for the 6th Circuit observed: “If professors lacked free-speech protections when teaching, a university would wield alarming power to compel ideological conformity. A university president could require a pacifist to declare that war is just, a civil rights icon to condemn the Freedom Riders, a believer to deny the existence of God, or a Soviet émigré to address his students as ‘comrades.’ That cannot be.”

As a result of the 6th Circuit’s decision, the university paid $400,000 to Meriwether in damages and lawyers fees, withdrew its 2018 threat, and publicly affirmed the professor’s First Amendment rights.

If the Biden administration moves to implement the proposed Title IX revision, it could face significant opposition from a Republican-led Congress in 2023. Rep. Jim Jordan (R-Ohio), who is likely to become chairman of the House Judiciary Committee if the GOP gains the majority in the lower chamber in November, told The Epoch Times he believes the proposal “lacks common sense, but thankfully, the American people see right through it.”