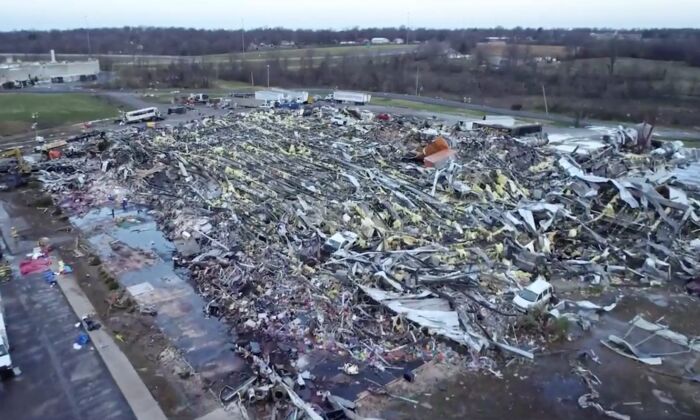 Aerial view of a candle factory after a tornado tore through, in Mayfield, Ky., on Dec. 11, 2021.(Michael Gordon/Storm Chasing Video via Reuters)
Executive Branch

President Joe Biden took an aerial tour over parts of Kentucky Wednesday morning to assess storm damage from deadly weekend tornadoes, and later in the day approved the federal government covering the entire cost for cleanup.

On Wednesday, Dec. 15, Biden upped the funds to Kentucky from 75 percent to 100 percent of the cleanup cost over the following 30 days.

When reporters asked if more money is needed from Congress, Biden said, “We don’t need it now.”

“It’s incredible how ya’ll have stepped up,” the president said Wednesday during an address in Dawson Springs, Kentucky. “I’m going make sure the federal government steps up and that we do every single thing.”

More than 30 tornadoes tore through Kentucky and seven other states over the course of Friday and Saturday, killing at least 88 people, including 74 in Kentucky, and leaving thousands more without a home or without power.

“There’s no red tornadoes, there’s no blue tornadoes,” Biden said at a briefing in Mayfield, Kentucky, the city where the storm hit a candle factory with more than 100 employees still inside the building at the time the tornado struck.

A wireless emergency communications center has been activated at the candle factory site for charging and Internet service.

In February, Biden went to Houston to survey winter storm damage. He was in Idaho, Colorado, and California to survey wildfire damage during the summer. And Biden went to Louisiana as well as New Jersey and New York in September, after Hurricane Ida struck.

The president has repeatedly used these disasters to make the case for his legislative agenda, blaming climate change and noting $99 billion in losses this year.