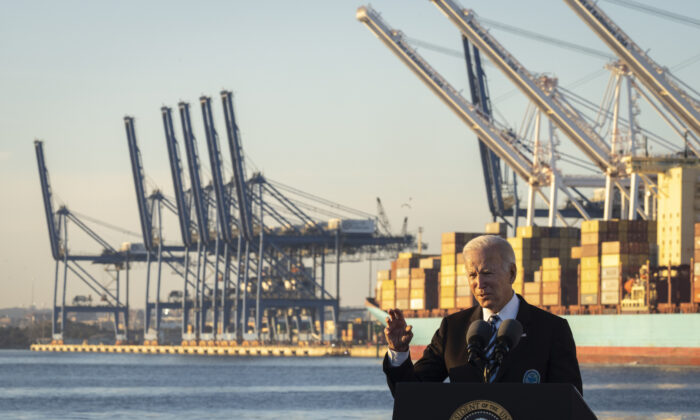 While it’s bad enough that President Joe Biden has nominated in Reta Jo Lewis a longtime, committed appeaser of the oppressive, genocidal, and expansionist People’s Republic of China to chair the Export-Import Bank of the United States, it’s probably worse that prominent U.S. business entities continue to gulp the Kool-Aid about the long widely-accepted but now thoroughly discredited notion that capitalism is wooing China into democratic reform and lawfulness.

Or, worse still, prominent businesses themselves actively taking part in Beijing’s bloody persecution of its own people.

Placing Lewis at the helm of EXIM is comparable to Chamberlain taking over from Churchill against the Nazis, instead of the other way around. President Donald Trump’s EXIM chairman, Kimberly Reed, secured unprecedented broad bipartisan support within Congress for the export credit agency with a multi-pronged commitment to comprehensive reform of EXIM, including increased transparency, strengthened taxpayer protections, zero tolerance for “bad actor” corruption, and preventing the displacement of private investment for exports; plus, most importantly, the launching of a “Program on China and Transformational Exports,” a project that’s unlike anything EXIM had done since its establishment during the New Deal.

EXIM’s China Program, mandated by Congress, was intended to make EXIM’s private loan guarantees and other products for U.S. exporters “fully competitive with rates, terms, and other conditions established by the People’s Republic of China” for its export business interests, utilizing 20 percent of EXIM’s total financing authority–some $27 billion out of $135 billion–and to advance competition with China in “innovation, employment, and technological standards” focused on 10 industries ranging from 5G to fintech to renewable energy to biotechnology.

Bush Treasury Department veteran Reed soon poached a heavyweight from the Pentagon to run EXIM’s China Program, the chief of staff of the undersecretary of defense for policy, who had also been juggling the handling of international security affairs at the Pentagon and had held senior positions at defense contractors Raytheon and Lockheed Martin.

At variance to someone as serious in recognizing the China threat as Reed, Lewis has spent many years accommodating Beijing’s economic warfare against the United States.  She is a strategic adviser to the United States Heartland China Association, an organization with links to communist China’s Ministry of Foreign Affairs and headed by former Missouri Democratic Gov. Bob Holden, whose moral equivalency mantra regarding America and China is that “there are scoundrels, so to speak, in China; sadly, there’s also scoundrels in our own culture.”

Holden has also done the bidding of the many Confucius Institutes, a prime tool of infiltration in U.S. educational institutions that a bipartisan Senate committee in 2019 found to be completely controlled by the Chinese Communist Party in all its U.S. activities. In Holden’s remarkably naive perspective, “What we’ve got to do is find the good people in both cultures, build those relationships, and then the rest will take care of itself, because the politics will react to what the people want done long term.”

But the long term has arrived. Next month will mark a half-century since the Nixon administration’s Shanghai Communiqué with Beijing, in which the Communist Party promised that “China will never be a superpower and it opposes hegemony and power politics of any kind,” that “the people of all countries have the right to choose their social systems according to their own wishes,” and that Washington and Beijing will both “facilitate the progressive development of trade between their two countries.”

In the 50 years since, communist China has gone far in implementing a military and economic strategy with the objective of superpower status, seeking by 2050 to “become a prosperous, modern, and strong socialist country with a ‘world-class’ military,” has squashed Hong Kong’s system of economic and civil liberties, and has used trade to devastate the U.S. manufacturing sector.

Peter Navarro, National Trade Council director in the Trump White House, contended that mainland China has “well over 50 percent market share in most of the traditional manufacturing industries; they have become the factory floor of the world” through executing more than 50 “policies and practices with the goal of advancing their own economic dominance, which has, in itself, military implications,” including the forced use of Chinese brands and stealing or forcing the transfer of technology and intellectual property.

As Lewis’s USHCA bio boasts, she has traveled extensively throughout China, meeting with Party secretaries, mayors, governors, and city secretaries of trade and investment and education, in more than 12 provincial localities. In the Obama administration, Lewis was the principal negotiator between the United States and China in establishing the first U.S. Governor’s Forums with China.

That initiative, in particular, demonstrates the PRC’s proficiency in jumping over Washington heads and infiltrating U.S. economic life–with little disguise. Trump Secretary of State Mike Pompeo went so far as to appear before the National Governors Association in 2019 and devoted his entire speech to China’s insidious efforts to persuade state chief executives and regional business leaders that Beijing’s interests were also theirs.

Pompeo told the governors that “a Chinese government-backed think tank in Beijing produced a report that assessed all 50 of America’s governors on their attitudes towards China. They labeled each of you ‘friendly,’ ‘hardline,’ or ‘ambiguous.’ … and, in fact, whether you are viewed by the CCP as friendly or hardline, know that it’s working you. Know that it’s working the team around you.”

How far can state governments be bamboozled by the Chinese Communist Party? Far beyond, say, helping a state firm use a factory in mainland China, Pompeo pointed out that, for instance, “California’s pension fund, the largest public pension fund in the country, is invested in companies that supply the People’s Liberation Army that puts our soldiers, sailors, airmen, and Marines at risk.”

Pompeo’s speech has conveniently vanished from the State Department’s website. Fortunately, the public can still read it here or watch it on YouTube.

As The American Interest’s Ellen Bork has pointed out, the PRC works overtime “to project its influence into American society—at universities and think tanks, newspapers, radio and television, business, as well as national, state, and local governments.” Bork cited a U.S. government official who warned that “The PRC is targeting states, trying to integrate their economies as closely as possible with China’s to make them dependent on the Chinese economy.”

A year ago, Lewis proposed that the State Department “reinstate the U.S.-China Governors Forum to Promote Sub-National Cooperation, for which U.S. participation was discontinued in 2020 … strengthening bilateral trade, investment, and technology exchanges by locales on both sides.”

Nothing could be more in line with Beijing’s economic strategy against the United States.

And it’s nothing new for Lewis. Eleven years ago, when she was the State Department’s special representative for global intergovernmental affairs, Lewis said of the U.S.-China Governors Forum “this is the start of the relationship.” She pointed to “over 36 state-to-provincial relationships that have been going on for years. And we want to continue to encourage that … we are operating as a whole-of-government approach in this effort.”

Later, at the U.S.-China Governors Forum in July of 2011, Lewis outlined the goal to “draw our states, territories, and provinces closer together and help us build a brighter world for future generations.”

This is par for the course for the Biden administration. In September, Biden Commerce Secretary Gina Raimondo told the Wall Street Journal, “I actually think robust commercial engagement will help to mitigate any potential tensions” between the United States and Communist China, remarking that part of her job is to encourage American businesses to engage with mainland China–as if the cheap labor there wasn’t incentive enough.

Unfortunately, much of corporate America either cannot see the threat or only see dollar signs.

“World peace through world trade,” declares Apple CEO Tim Cook, who argues that the company has a “responsibility” to do business in as many places in the world as it can, and, of course, make countless billions doing so. In May 2021, The Information revealed that “seven companies supplying device components, coatings and assembly services to Apple … are linked to alleged forced labor involving Uyghurs and other oppressed minorities in China. At least five of those companies received thousands of Uyghur and other minority workers at specific factory sites or subsidiaries that did work for Apple.”

Why settle for cheap labor when you can get slave labor?

The notion that Lewis, who for so long has been blind to the destructive influence of the PRC upon the U.S. economy, and who fails to see Beijing’s underlying objectives of expansionism in sync with its economic warfare, can now pivot and oversee an agency whose explicit objective is to counter the PRC threat on a global economic playing field tilted against the United States, with at least 116 rival export credit agencies of other nations also opposing EXIM, is ludicrous.