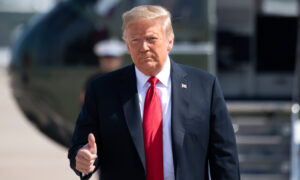 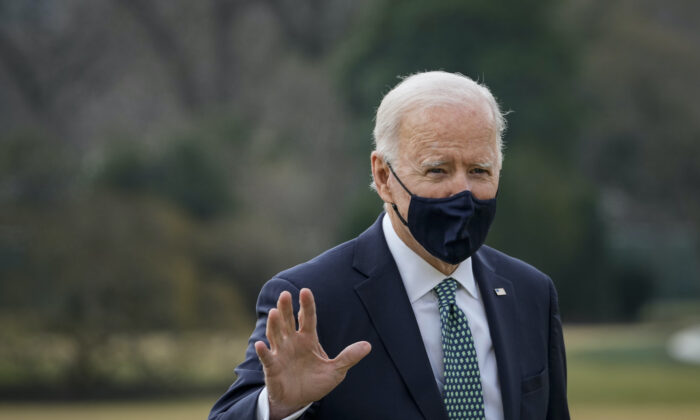 U.S. President Joe Biden walks to the Oval Office after exiting Marine One on the South Lawn of the White House in Washington on March 17, 2021. (Drew Angerer/Getty Images)
Judiciary

President Joe Biden announced on March 30 his first judicial nominations, a diverse slate that shows his intention to reshape the federal bench to “reflect the full diversity of the American people,” according to a White House statement.

The White House called the nominees “groundbreaking.” Among the 11 nominees are nine women, three African American women for Circuit Court vacancies, the first Muslim American for a federal judgeship, the first appointee for the U.S. District Court for the District of Columbia with an Asian American and Pacific Islander background, and the first woman of color candidate to the federal judiciary in Maryland.

“This trailblazing slate of nominees draws from the very best and brightest minds of the American legal profession,” Biden said in the statement. “Each is deeply qualified and prepared to deliver justice faithfully under our Constitution and impartially to the American people—and together they represent the broad diversity of background, experience, and perspective that makes our nation strong.”

Among the candidates, Ketanji Brown Jackson, a district court judge in Washington, was nominated to fill the vacancy left by Merrick Garland on the U.S. Court of Appeals for the D.C. Circuit. The Senate confirmed Garland on March 10 to become Biden’s attorney general.

Jackson had ruled against then-President Donald Trump on several issues, notably when she blocked Trump’s plan to expand fast-track deportations of illegal immigrants in September 2019.

Lydia Griggsby, a judge on the U.S. Court of Federal Claims, would the first woman of color to serve as a judge on the district court in Maryland if confirmed.

The White House also touted that Biden’s release of his slate of nominees “is faster than any president in modern history.”

“With respect to Circuit and District Courts, none of the last four administrations had nominated more than two candidates by this point in their presidency,” the statement read.

Trump made his first judicial nomination on Jan. 31, 2017, less than two weeks after taking office. He nominated Neil Gorsuch for Supreme Court justice; Gorsuch was confirmed on April 7, 2017. Trump’s first nomination for a lower court was made in March 2017 when he picked Amul Thapar to serve as a judge in the Court of Appeals for the 6th Circuit.

The federal court system has three main levels: district courts; circuit courts, which are the first level of appeal; and the Supreme Court as the final level of appeal. Federal judges are appointed by the president and must be confirmed by the Senate.