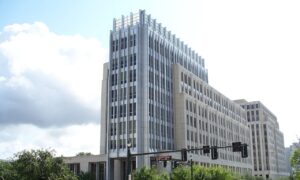 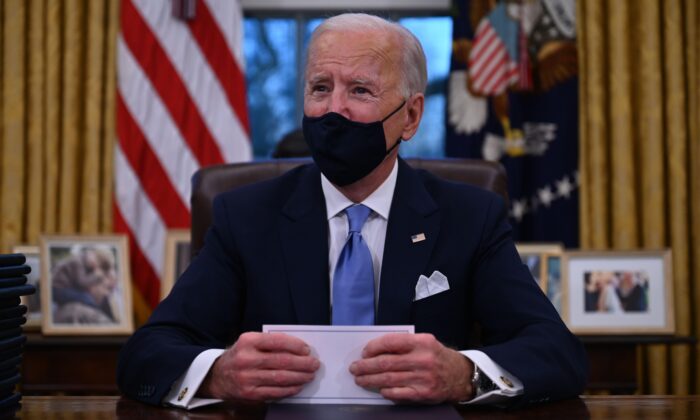 President Joe Biden prepares to sign a series of orders in the Oval Office of the White House in Washington on Jan. 20, 2021. (Jim Watson/AFP via Getty Images)
Politics

President Joe Biden has rolled back executive orders of President Donald Trump aimed at cutting federal regulatory burden, hinting the already enormous regulatory regime may spring back to that of its pre-Trump days.

In two Jan. 20 executive orders, Biden nixed about a dozen orders of Trump’s that pertained to regulatory reform, including one on “Reducing Regulation and Controlling Regulatory Costs” and one “Expediting Environmental Reviews and Approvals For High Priority Infrastructure Projects.”

Deregulation was one of Trump’s top achievements, cutting the final rule page count in the Federal Register to less than 21,000 in 2019 from the more than 38,000 left behind by the Obama administration, according to a 2020 report (pdf) by the Competitive Enterprise Institute (CEI).

“Regulations are an important tool for the federal government to address the crises facing the nation,” Biden’s transition team said in a Jan. 20 release. “The Trump Administration unnecessarily hamstrung this critical tool by creating arbitrary obstacles to regulatory action.”

The Office of Management and Budget (OMB) estimates the annual cost of federal regulation is about $140 billion, though the full “compliance costs, economic and GDP losses, and social costs” is roughly $1.9 trillion, according to the CEI report and a 2017 paper by its Vice President for Policy Wayne Crews.

“Lawlessness, unaccountability and #regulatorydarkmatter to make their promised comeback in the @JoeBiden @whitehouse,” Crews commented in a Jan. 20 tweet.

Biden also issued an order on Jan. 20 to change the way the OMB evaluates the impact of new regulations.

Previously, the review was supposed to weigh the cost and benefits of significant regulations and follow the principle that “in choosing among alternative regulatory approaches, agencies should select those approaches that maximize net benefits (including potential economic, environmental, public health and safety, and other advantages; distributive impacts; and equity),” as per a 1993 executive order of President Bill Clinton (pdf).

The OMB needs to make sure “regulatory review serves as a tool to affirmatively promote regulations that advance these values,” Biden’s order states.

CEI recommends Congress should vote on significant regulation changes instead of delegating the power to the executive branch.

“Getting lawmakers on the record as supporting or opposing specific rules would reestablish congressional accountability and affirm a principle of ‘no regulation without representation,’” its report said.