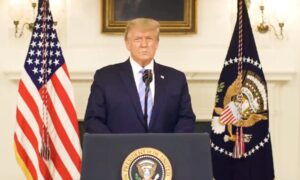 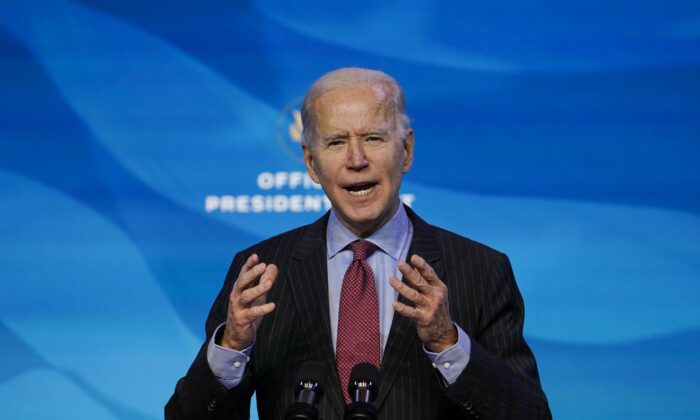 President-elect Joe Biden said on Jan. 8 that his administration plans to prioritize minorities for access to resources needed to reopen and rebuild amid the ongoing CCP virus pandemic.

In previewing his priorities for spending to address the CCP (Chinese Communist Party) virus pandemic, the former vice president said the priority for the small business stimulus will be on “black, Latino, Asian, and Native American-owned small businesses, and women-owned businesses, finally having equal access to the resources needed to reopen and rebuild.”

Biden added that his administration will focus on making “real efforts” to assist communities that “have faced systemic barriers to relief.”

He said a key focus of his administration will be to “correct the current administration’s failures to get relief to Main Street, small businesses that are most in need.”

“Mom and pop stores are the backbone of the economy,” Biden said. “They’re the glue that holds communities together.

“Previous rounds of economic relief last year helped millions of small businesses stay afloat and keep employees in the payroll. But there were clear problems. Black and brown-owned small businesses had less access to that relief. Mom and pop shops were often the last in line, while big well-connected businesses jumped in front of the line and got more relief and got it faster.”

The Trump administration in May 2020 set aside $10 billion of additional Paycheck Protection Program funding to ensure that small business owners in all communities had access to needed capital to keep American workers employed.

Biden made the remarks in outlining a plan which could cost taxpayers “trillions” of dollars and would include $2,000 direct payments to individuals and support for small businesses.

The president-elect on Jan. 8 said that “it’s time to raise the minimum wage” to $15, but did not explain how the move would help small businesses already struggling to pay their staff. The Congressional Budget Office estimated (pdf) in July 2019 that raising the federal minimum wage to $15 would result in the loss of 1.3 million jobs nationwide. Biden’s transition team didn’t immediately respond to a request by The Epoch Times for comment.

Biden’s latest statement on support for small businesses has been met with widespread criticism on social media, with many suggesting that the move will fuel divisiveness nationwide.

Ana Rosa Quintana, Latin America policy analyst for The Heritage Foundation, wrote: “My skin color doesn’t make me more important than my fellow white Americans. Make us all the priority.”

Luke Negron, 2020 Republican nominee for Congress in Pennsylvania’s 18th District, wrote: “As someone with black and Hispanic heritage who would directly benefit from this, the Biden standard of racial and sexual discrimination disgusts me.

“This level of racism and sexism is impeachable if and when executed by a president.”

Biden is scheduled to be sworn in as 46th president of the United States on Jan. 20.