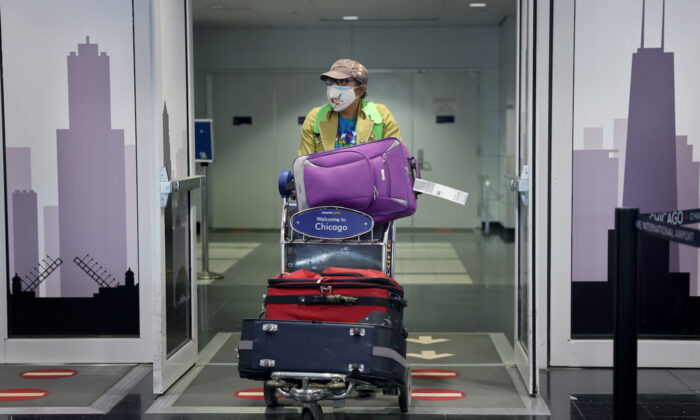 The White House said Friday that the Biden administration will lift travel restrictions on eight southern African countries imposed last month in a bid to curb of the spread of the highly contagious Omicron variant of the CCP (Chinese Communist Party) virus.

Kevin Munoz, spokesperson for the White House, said in a tweet that President Joe Biden will lift the restrictions on Dec. 31, adding that the move was recommended by the Centers for Disease Control and Prevention (CDC).

“The restrictions gave us time to understand Omicron and we know our existing vaccines work against Omicron, esp boosted,” Munoz wrote on Twitter.

After Omicron was detected in southern Africa last month, the Biden administration barred entry to the United States for nearly all non-U.S. citizens who had recently been in Botswana, Eswatini, Zimbabwe, Lesotho, Malawi, Mozambique, Namibia, and South Africa.

When President Joe Biden announced the restrictions, he called them a “precautionary measure until we have more information,” adding that the move would be subject to re-evaluation.

While it is unclear whether the restrictions slowed the spread of Omicron in the United States, a senior Biden administration official told Reuters that the travel ban “has served its purpose.”

“It bought time to understand the science, it gave time to analyze the variant,” the official told Reuters.

“This was not meant to keep Omicron out. We knew we couldn’t do that. The point was to reduce the number of cases coming in—in those early days and weeks.”

The CDC said on Dec. 20 that Omicron had been detected in most states and territories and was “rapidly increasing the proportion of COVID-19 cases it is causing.”

The agency added that scenario analyses indicate that the spread of Omicron in the United States is “likely to lead to a national surge in the coming weeks with peak daily numbers of new infections that could exceed previous peaks.”

Researchers at the Institute for Health Metrics and Evaluation (IHME) at the University of Washington’s School of Medicine have revised their COVID-19 infection projection model to include omicron. They estimate the United States could see a total of around 140 million new infections over the next three months, peaking in late-January at about 2.8 million new daily infections.

At least 74 percent of Americans have reportedly received at least one dose of vaccine and around 62 percent have been fully vaccinated.

Early studies from drugmakers indicate that some of the current treatments for COVID-19 seem to be effective against Omicron, while early data from South Africa suggests it is far less severe.

Still, even if Omicron infection does lead to less severe disease, its rapid growth rate—believed to come from a combination of higher transmissibility and increased immune evasion—will likely mean more infections and so “the absolute numbers of people with severe outcomes could be substantial,” the CDC said.