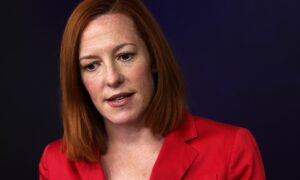 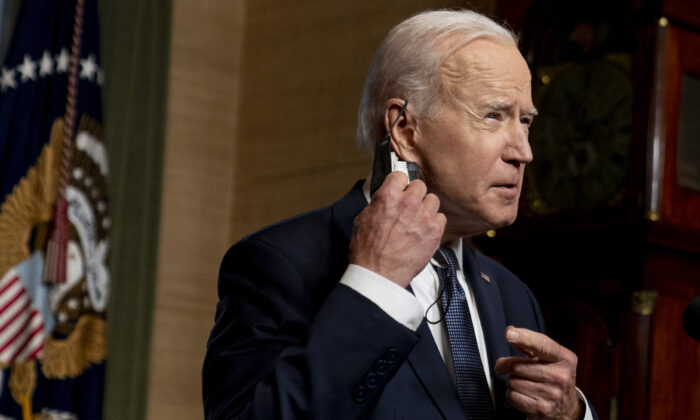 President Joe Biden removes his mask to speak from the Treaty Room in the White House about the withdrawal of U.S. troops from Afghanistan in Washington on April 14, 2021. (Andrew Harnik-Pool/Getty Images)
Executive Branch

President Joe Biden is scheduled on Monday to meet with a bipartisan group of Congress members to discuss his $2.2 trillion infrastructure proposal.

Monday’s meeting, which is taking place in the Oval Office of the White House, will mark the second time a group of bipartisan lawmakers will convene with the president to discuss his newly unveiled plan, which has largely met with opposition from Republicans.

“These former state and local elected officials understand firsthand the impact of a federal investment in rebuilding our nation’s infrastructure on their communities,” the White House said in a statement on Sunday.

Hickenlooper previously served as mayor of Denver and governor of Colorado. Hoeven, King, Shaheen, Romney, and Crist are former governors, while Cleaver, Giménez, Granger, and Torres are all former mayors.

Biden unveiled his infrastructure proposal, which he dubbed the “American Jobs Plan,” at the end of March. He says it will create jobs, grow the economy, and make the United States more competitive internationally.

The wide-ranging proposal consists of two parts including traditional projects such as roads and bridges, and plans outside of infrastructure such as reducing carbon emissions in line with U.N. climate change goals, expanding health insurance coverage, and extending the expanded child tax benefit.

To pay for the proposal, the White House has proposed increasing the corporate tax rate to 28 percent from the current 21 percent.

The proposal has since received push back from Republican lawmakers, who say the components of the plan have little to do with infrastructure. They have, however, signaled that they are open to negotiate on smaller measures to address infrastructure needs across the country.

“Only about six percent of the president’s proposal actually goes to what everyday Americans would describe as infrastructure. If Democrats are interested in roads, bridges, highways, and perhaps broadband, there is a deal to be had there,” Sen. John Thune (R-S.D.), the GOP Senate whip, said last week on “Fox News Sunday.”

Senate Minority Leader Mitch McConnell (R-Ky.) had previously indicated that he would not support the infrastructure plan and said earlier this month that he was “hopeful that not every single Democrat” will back the measure. He has also characterized Biden’s proposal as “a Trojan horse for massive tax increases and a whole lot of more debt and whole lot of spending.”

Meanwhile, Republicans are currently crafting their own counter-proposal that would come in at the $600 to $800 billion range.

Romney, who is meeting Biden on Monday, said earlier this week that he thinks an $800 billion package might be too high. He also would like to focus on roads, airports, and other traditional infrastructure components.

Biden’s current plan to hike the corporate tax rate to pay for the bill has also drawn opposition from Republicans who voted for the Trump-era tax cuts. That measure slashed the same rate from 35 percent to where it is now.

Democrats will need to convince at least 10 Republicans in the Senate, or else they would be required to again turn to budget reconciliation, which would undermine Biden’s campaign promise to govern by unifying the country.