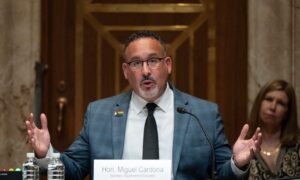 Biden stated that he was directing Education Secretary Miguel Cardona “to take additional steps to protect our children.”

As an example, he said the federal government may use money from the American Rescue Plan to pay an educator who has their salary cut by a governor.

“I am going to say a lot more about children in schools next week that as we head into the school year remember this, the Centers for Disease Control and Prevention, the CDC, says masks are critical, especially for those not yet vaccinated, like our children under the age of 12,” Biden said. “So let’s put politics aside. Let’s follow the educators and scientists, who know a lot more about how to teach our children and keep them safe than any politician. This administration is always going to take the side of our children.”

Florida Gov. Ron DeSantis and Texas Gov. Greg Abbott are among the governors who have banned school mask mandates. DeSantis has also moved to reduce funding equal to the pay of some education officials for school districts that move to force children to wear masks.

As he announced his order last month, DeSantis said that the U.S. government “has no right to tell parents that in order for their kids to attend school in person, they must be forced to wear a mask all day, every day.”

The order says that the Centers for Disease Control and Prevention’s (CDC) “guidance,” which has been widely adopted, “lacks a well-grounded scientific justification.” It referred to a Brown University Study that found no link between COVID-19 cases and wearing masks in schools.

“Many Florida schoolchildren have suffered under forced masking policies, and it is prudent to protect the ability of parents to make decisions regarding the wearing of masks by their children,” DeSantis said.

After Biden’s threat, Christina Pushaw, press secretary for DeSantis, told The Epoch Times via email that “the forced-maskers often criticize Governor DeSantis for overruling ‘local control’ to protect parents’ freedom to make health and education decisions for their own children.”

“I doubt they will apply the same principle to this blatant federal overreach,” she said. “CDC bureaucrats and their politicized ‘guidance’—which does not have the force of law—shouldn’t interfere with parents’ rights, which are protected under Florida law. Governor DeSantis will continue to stand up for Florida families and defend our rights, no matter what the Biden administration attempts to do.”