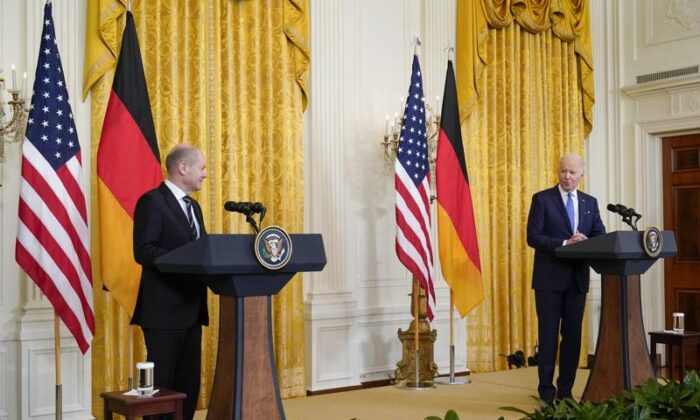 Biden: ‘There Will Be No Longer a Nord Stream 2’ If Russia Invades Ukraine

President Joe Biden said Monday that there will no longer be a Nord Stream 2 gas pipeline to Europe if Russia invades Ukraine.

In a joint press conference with German Chancellor Olaf Scholz on Feb. 7, the two leaders showed a united front in posing the threat of “far-reaching, severe” sanctions against Russia if it moves to invade Ukraine.

Both Biden and Scholz described a dual tract approach—calling for a diplomatic path forward with Russia while simultaneously preparing sanctions to impose quickly against Russia in the event of an invasion.

“If Russia invades that means tanks or troops crossing the border of Ukraine. Then there will be no longer a Nord Stream 2,” said Biden. “We will bring an end to it.”

When pressed on how this will be done when the pipeline is in German control Biden said: “I promise you we’ll be able to do it.”

U.S. officials have repeatedly made this threat but without firm commitment from Germany.

Both Biden and Scholz elected to leave some ambiguity as to the extent of the agreed-upon sanctions.

“It is part of this process that we do not spell everything out in public, because Russia could understand that there might be even more to come,” explained Scholz.

The approval process of the Nord Stream 2 pipeline has been delayed by Germany. Were it approved, it would carry 55 billion cubic meters of natural gas from Russia to Germany every year.

Russia has amassed tens of thousands of troops on its border with Ukraine and in Russia-annexed Crimea and Belarus in recent weeks.

This article will be updated as it develops.