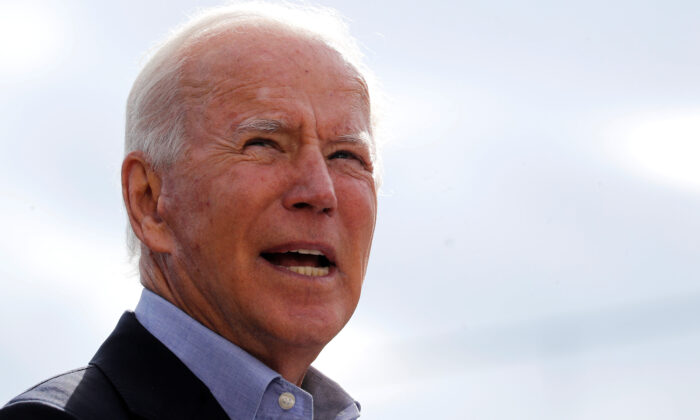 Democratic presidential nominee Joe Biden makes remarks as he prepares to board an Amtrak train to begin a campaign train tour in Cleveland, Ohio, on Sept. 30, 2020. (Mike Segar/Reuters)
Joe Biden

Biden: There Shouldn’t Be Second Debate If Trump Still Tests Positive for COVID-19

Democratic candidate Joe Biden has told reporters on Tuesday that if President Donald Trump continues to test positive for COVID-19, there shouldn’t be a second debate.

The second presidential debate is scheduled for Oct. 15 in Miami, Florida.

“I think if he still has COVID we shouldn’t have a debate,” Biden said, referring to Trump. “I think we were gonna have to follow very strict guidelines. Too many people have been infected. It’s a very serious problem, so I will be guided by the guidelines.”

Biden’s statement comes as Trump returned to the White House on Monday after having received treatment at Walter Reed National Military Medical Center. Trump announced that he and First Lady Melania Trump had tested positive for the CCP (Chinese Communist Party) virus in the early hours of Oct. 2.

Symone Sanders, a senior campaign adviser to Biden, told CNN on Sunday that Biden was “looking forward” to the upcoming debate. And Kate Bedingfield, Biden’s deputy campaign manager, had told ABC News on Sunday that the former vice president “will certainly” be at the debates.

“We hope that they’re going to put in place every adjustment necessary to ensure that it’s fully safe,” she said.

“And, obviously, we send President Trump our best,” Bedingfield added. “We hope that he is well and able to debate. If he is, Joe Biden will certainly be there.”

She added that the 77-year-old former vice president would participate, “assuming that the commission puts in place the necessary requirements to ensure that everybody is safe, which is first and foremost the most important thing.”

Biden’s campaign said in a statement on Tuesday that he “underwent PCR testing for COVID-19 today and COVID-19 was not detected.” This marks the third time since Biden has tested negative since Trump’s positive COVID-19 diagnosis.

President Trump wrote on Twitter on Tuesday that he was “Feeling great!” and is “looking forward” to the debate. On Monday, the president announced on the social media platform that he “Will be back on the Campaign Trail soon!!”

In a video message posted on Monday, Trump told Americans “don’t let it dominate you,” referring to the COVID-19 disease, and played with the idea that he may be immune to the disease.

A number of Trump administration officials and others have since tested positive for the virus, some of whom were noted to have attended the White House Rose Garden event to announce the Supreme Court nomination of Judge Amy Coney Barrett on Sept. 26.

Others present at the Sept. 26 event tested negative for the CCP virus on Friday, including Barrett and Attorney General William Barr.